“Mostly, it’s a book about what democrats can do to level the playing field in electoral politics”: David Faris will talk you into fighting dirty

“I think that there’s a moral reason to award statehood to DC and Puerto Rico, but there’s also a partisan reason — and that is that they would probably send four Democratic senators to Washington, DC immediately. So if we had DC and Puerto Rico as states right now, the Democrats would hold the Senate right now. So with the election of Doug Jones, the Trump administration would effectively have been over last December.”

Those are the words of bona fide political genius, human dynamo, and Tic Tac survivor David Faris, author of It’s Time to Fight to Dirty: How Democrats Can Build a Lasting Majority in American Politics. He was speaking last month at Chicago’s City Lit Books, and C-SPAN, who were in the house, have just made their footage available online through Book TV. You can and absolutely should watch it right here.

It’s a powerhouse of a talk, direct, engaging, and totally strategic. Among the subjects he addresses:

It only gets better from there. The whole talk clocks in under an hour, and is guaranteed to give you enduring Galaxy Brain for all discussions of American politics henceforth in perpetuity through the universe. Watch it right here. Or, wait, better yet, just click this convenient image of David mid-imparting-of-brilliance: And then, for a bonus track, check out David’s appearance last month on The Majority Report with Sam Seder. Hell yes: 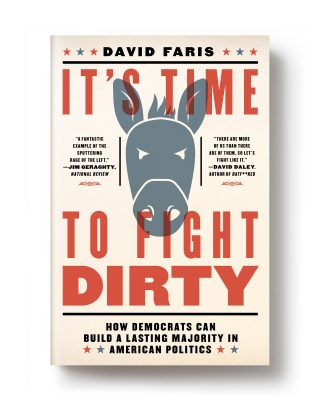 It’s Time to Fight Dirty is on sale now. Buy your copy here, or at your neighborhood independent bookstore.