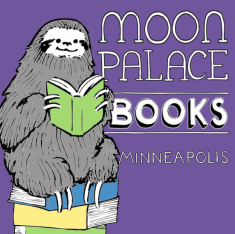 Minneapolis’s Moon Palace Books is moving — again! As you may recall, the beloved indie in the city’s Longfellow neighborhood moved to their current Minnehaha Street address just last year, in July. Memorably, that move was carried out assembly-line style, with the help of sixty book-loving volunteers. Together the booksellers and volunteers formed a line and moved an estimated 10,000 new books (to say nothing of the store’s used selection) from the old Moon Palace to the new one, which was just around the corner. It worked like a (downright charming) charm. Per Tracy Mumford of MPR News:

Including water and doughnut breaks, the brigade managed to transport 10,000 books in a little over three hours. When there was a genre shift—when the stock moved from children’s books to adult fiction to biography—they passed the information down the line in a giant game of telephone: “Here comes fiction! Fiction coming!”

That move, though, was “practice,” co-owner Jamie Schwesnedl now tells CityPages’ Emily Cassel. The Minnehaha Street location was always imagined as a temporary space, a mid-sized stopgap between Moon Palace I and Moon Palace III. “[Schwesnedl] and his wife and co-owner, Angela, wanted a slightly larger, intermediate shop that would lessen the learning curve as they looked for a much bigger, multi-function space.”

And the Schwesnedls have found such a space, just two blocks away from the current location. So what do they intend to do with all that multi-functional breathing room? Good, fair question. Here’s the good, exciting answer: more books, bigger events, coffee, beer, wine and—why the hell not?—a full restaurant. That’s right, Moon Palace is bravely going where few bookstores have gone before (or are heading soon). The Bronx’s Lit. Bar (which, hell yeah, is opening soon) will serve up both books and wine; Denver’s BookBar offers the same. Both Busboys and Poets and Barnes and Nobles of the future house (or plan to house) full-service restaurants.

No doubt, it’s a good plan. Nothing reaffirms the importance of bookstores as community spaces quite like a few rounds of beer and a warm meal. Also, beer offers much better margins.

As for further details, Moon Palace isn’t giving much away. Not quite yet. But according to Cassel, the Schwesnedls did disclose that they’ll be working with “an old friend who runs a restaurant in south Minneapolis and whose food we really love.” And, Jamie Schwesnedl notes, another volunteer assembly-line may be coming. Beer, hopefully, will be provided.