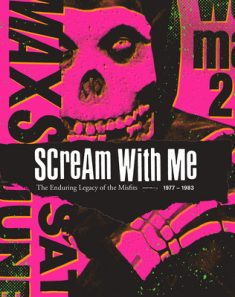 Earlier this week, Misfits—the famous punk band famously litigious about their famous monsters (and about one another)—has sued book publisher Abrams for what they claim are unlicensed reproductions of the band’s IP and imagery in a recent book.

The offending book, 2019’s Scream With Me: The Enduring Legacy of the Misfits, by Tom Bejgrowicz and Jeremy Dean with a Foreword by Shepard Fairey describes itself thusly:

Formed in 1977, the Misfits deeply influenced the genres of punk rock and metal alike by blending their music with horror film themes and imagery. This is their visual story as told through the original ephemera that helped define their legacy. Scream With Me spotlights the band’s iconic and influential album and single art, fan club merchandise, original posters, show flyers, and one-of-a-kind, never-before-seen rarities, culled primarily from the extensive collection of archivist Umberto D’Urso.

And it’s those 300 color photographs that are the problem. As hard rock news site Blabbermouth.net reports of the suit:

The complaint, which was filed on March 9 by Misfits A.D. — the limited liability company established by MISFITS founding members Glenn Danzig and Jerry Only to own and manage intellectual property, including trademarks and copyrights, associated with the MISFITS — claims Abrams’s photobook “is rife with large-scale, repeated, and unlicensed reproductions of Misfits A.D. intellectual property. For example, the cover of the photobook prominently displays, without authorization, the Misfits A.D. ‘Fiend Skull design’ trademark and, in doing so, misleads consumers into believing that the photo book has been approved by, or is associated with, Misfits A.D., which is indisputably false,” the lawsuit reads.

Reporting from the World IP Review indicates that the Abrams and the LLC did correspond in advance of the book’s release, at which point Abrams declared their rights under copyright and trademark precedent. Now, after the suit, WIPR says Abrams will continue to “vigorously defend” that stance.

After decades of reboots with various members, the band reunited as The Original Misfits in 2016.