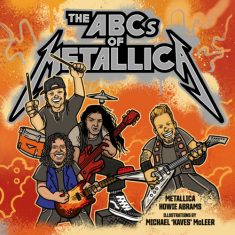 If you’ve been dreaming of the best way to introduce your little ones to the masters of such classics as “Seek & Destroy” and “Creeping Death,” look no further! Heavy metal band Metallica is releasing a new illustrated book for children this November entitled The ABCs of Metallica published by Permuted Press.

The band formed in 1981 and has released ten studio albums, including the most recent “Self Destruct” in 2016 which was nominated for a Grammy and has sold over five million copies. They are currently touring Europe and will return to San Francisco in September to play two dates. They announced the book of their website:

We have a new book coming out and this time it rhymes! We’re having a bit of fun as The ABCs of Metallica hits the shelves and online book stores on November 26, 2019…

Including rhymes and illustrations, The ABCs of Metallica looks back at the history of the band from, duh, A to Z! Each letter of the alphabet highlights a moment along our journey from Garage Days to Master of Puppets to fun facts about us.

A portion of the proceeds from sales will go to the band’s charity All Within My Hands Foundation which was founded in 2017 and is dedicated to creating sustainable communities by supporting workforce education, the fight against hunger, and other critical local services.

Independent publishers Permuted Press have had success with Hip Hop Alphabet and the subsequent Hip Hop Alphabet 2, introducing kids to the hop hop culture and legends of the likes of LL Cool J, the Beastie Boys and Jay-Z. Written by Howie Abrams and illustrated by Michael Kaves, the pair will be now be working with Metallica on their new alphabetic compendium. It’s an interesting aside for Permuted Press who are known for publishing sci-fi, fantasy, post-apocalyptic and horror fiction, although one could argue that heavy metal and horror are easy bedfellows, and it is well known that Metallica’s lead guitarist Kirk Hammett, is also an avid collector of classic horror and sci-fi movie posters.

Whether you intend to introduce your kids to the thrashings of Metallica or, more likely, want to relish a fun trip down memory lane for yourself, the book will hit stores just in time for Christmas.

Christopher Lee, legendary actor/Saruman, releases heavy metal album inspired by "Don Quixote" on his 92nd birthday; or we can all go home now