Merriam-Webster’s Word of the Year is “they” 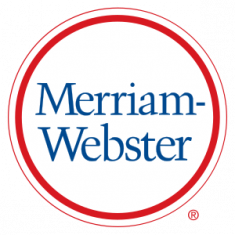 As 2019 comes to a close, we have even more “Word of the Year” news to report: Merriam-Webster dictionary has announced “they” as their Word of the Year, specifically because of its more recent usage to describe non-binary people.

In a statement, Merriam-Webster said:

English famously lacks a gender-neutral singular pronoun to correspond neatly with singular pronouns like ‘everyone’ or ‘someone’, and as a consequence ‘they’ has been used for this purpose for over 600 years. More recently, though, ‘they’ has also been used to refer to one person whose gender identity is non-binary, a sense that is increasingly common in published, edited text, as well as social media and in daily personal interactions between English speakers.

2019 was a big year for “they”: Allison Flood at The Guardian reports that look-ups for “they” increased by 313% in 2019 compared with 2018. Also in 2019, Merriam-Webster updated the dictionary definition of “they” to reflect its usage in reference to non-binary gender identity.

Other words in the running for Word of the Year: “quid pro quo,” “exculpate,” and “impeach.” We predict “impeach” will still be holding strong in 2020.