Merriam-Webster will not abide Trump’s degradation of language 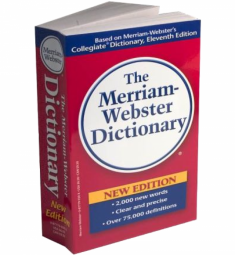 Throughout the 2016 election we marched alongside dictionary publisher and darlings of the Revolution Merriam-Webster. Today, we’re pleased to report that they’re still at it, offering their snarky and informative resistance as a cupped hand around the fragile candle-flame of language, otherwise abandoned in the gale-force winds of the Trump presidency.

Merriam-Webster most recently challenged the administration’s strange commitment to “Alternative Facts,” with a tweet clarifying the definition of “fact”: “a piece of information presented as having objective reality.” Online look ups of the word “fact” had spiked on January 22nd, after Kellyanne Conway willfully confused the word with something closer to “not facts.”

On January 23rd, the word “Claque” topped Merriam-Webster’s daily trending list. The noun—meaning “a group hired to applaud at a performance”—became relevant during Trump’s visit to the CIA the day after his inauguration. Several people in attendance had no business being there, other than to applaud Trump. They were, in a word, claqueurs.

According to the dictionary:

A National Guard said he recollected having seen the man, and even speaking to him, at the Opera on Friday night last. The National Guard describes him as belonging to the claque, or hired applauders of the theatre.
—The Scotsman, 4 Jan. 1837

Those who have read David Cay Johnston’s The Making of Donald Trump will recognize the claqueur as a key operative in the Trump playbook — even if readers didn’t previously know the word for it.

In more forward-thinking look-up trends, “Intersex” has spiked in correlation with Belgian fashion model Hanne Gaby Odiele coming out as a representative of that hugely underrepresented community. She hopes to be an advocate for those exhausted from taking shit for their gender non-conformity. Feminism is also trending, presumably because it is time for all of us to demand gender equality now.