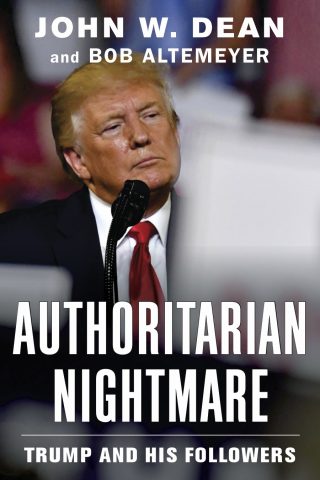 The book will be co-written by Dean and psychology professor Bob Altemeyer, a specialist in the study of authoritarianism. It will be the first book to look at Trump his followers in the context of authoritarianism by using psychological diagnostic tools, as well as polling conducted by The Monmouth University Polling Institute, to offer an eye-opening revelation of how Trump and his supporters have gotten where they are, and to consider where they may go next.

“Donald Trump makes the problems that Richard Nixon created appear almost inconsequential,” Dean says. “I went to Bob Altemeyer to ask him to join me in writing this book because he has been studying authoritarian personalities for forty years. I was eager to combine his more scientific expertise with my first hand experience working for Nixon, our last authoritarian president.”

As Altemeyer explains, “Many people now realize the wolf is at the door for America, as researchers long warned could happen. But they do not understand why and how their democracy might disappear in a matter of months, if not weeks.  John and I  hope this book helps Americans understand what is going on so they can save their democracy. ”

The book, originally intended as a campaign-season book, “has a whole new relevance,” says publisher Dennis Johnson, “given Trump’s recent handling of the Covid-19 pandemic, and threats to use the army against American citizens peacefully protesting the murder of George Floyd. Understanding the phenomenon of authoritarianism helps us know what to expect — and what we can do about it.”

AUTHORITARIAN NIGHTMARE: TRUMP AND HIS FOLLOWERS, will be published on August 25, 2020.

John W. Dean served as White House counsel for President Richard Nixon from 1970 to 1973. During the Watergate scandal, his Senate testimony helped lead to Nixon’s resignation. Dean is the author of five New York Times bestsellers, including “Blind Ambition” and “Conservatives Without Conscience.” He is a regular political/legal commentator on CNN.

Bob Altemeyer‘s research on the psychological makeup of authoritarian leaders and followers has established him as the recognized expert in the field. He was awarded the American Association for the Advancement of Science Prize for Behavioral Science Research in 1986.