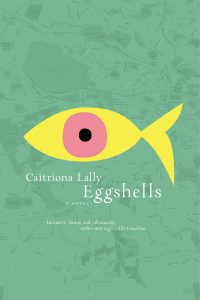 In 2017, Melville House published the poignant and stirring novel, Eggshells by Caitriona Lally. A novel about identity, fitting in, and human connection, it’s no surprise that this book is beloved by many. The Guardian called it, “inventive, funny and, ultimately, moving.”  Kirkus Reviews called it an “urban fairytale” and said it “delivers something that is both subtle and profound in its examination of the human soul. Magically delicious.”

So, we’re happy to announce that author Lally just won the prestigious Rooney Prize for Irish Literature from Trinity College Dublin. As reported in The Washington Post, the prize committee felt Eggshells exemplified “a work of impressive imaginative reach, witty, subtle and occasionally endearingly unpredictable.” Wow! And if we do say so ourselves, the book is rather magnificent.

Lally, as it happens, is also an employee of Trinity College Dublin, where she works as a cleaner. She didn’t even know she was nominated for the award, and told The Washington Post that the prize was “the happiest shock of my life.”