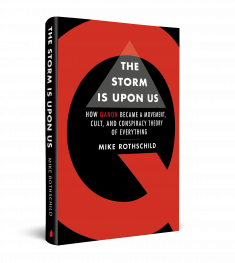 (Brooklyn, NY) Melville House Publishing is pleased to announce the forthcoming publication of THE STORM IS UPON US: How QAnon Became a Movement, Cult, and Conspiracy Theory of Everything by Mike Rothschild, a widely respected journalist recognized for his expertise in researching and analyzing conspiracy theories. The book is the first serious study of the insidious  QAnon conspiracy cult to see print, and is scheduled for publication on June 22 with a first printing of 500,000 copies ($28.99).
Rothschild has been studying the QAnon phenomenon since early 2018, and was one of the first journalists not only to reveal its connections to past conspiracy theories and scams, but also to openly address its danger to the American public—and beyond.
As Melville House co-founder and Publisher Dennis Johnson says of THE STORM IS UPON US, “Mike Rothschild is the rare, empathic journalist who ‘got’ the QAnon phenomenon right from the start. He recognized that it was coming from a long history of scamming and blaming that is woven into the American fabric, though it’s now gone international. Understanding that background—and caring about the typical Q member as a person caught up in a cultish conspiracy theory —make Mike the perfect person to write a book not only about what the Q phenomenon is, but also where it’s likely to go next.”
In THE STORM IS UPON US, Rothschild takes us on the wildest of guided tours—the background conspiracies and cults that first fed the flowering of Q; its embrace by right-wing media and a complex of grifters, gurus, and eventually, former President Donald Trump; the rending of families whose loved ones became swept away by Q’s increasingly violent rhetoric; and ultimately, the storming of the Capitol on January 6, which revealed the full power of the venomous movement for all to see as it unfolded live on national television.
Who were those pillagers of the Capitol on January 6? How did their worldview lead them into planning and committing such horrific violence? And why do their numbers keep growing, even after the termination of Trump’s reign, the continued failure of Q’s prophecies and predictions to come true, and widespread denunciations from Americans of all stripes from coast to coast? These are just a few of the urgent questions surrounding QAnon that the book examines in depth.
Mike Rothschild is a journalist who since 2018 has focused on the intersections between internet culture and politics as seen through the dark glass of conspiracy theories. He has interviewed hundreds of QAnon converts, apostates, strategists and their victims, while also consulting with scores of psychologists, sociologists and academics. All of this enabled Rothschild to grasp the implications of this increasingly pernicious movement as very few others are qualified to do, which has made him a popular “talking head” on the subject for The New York Times, The Washington Post, NPR, CNN, MSNBC, the BBC, and many other key media outlets.
As Rothschild says of his years of researching THE STORM IS UPON US, “While there has been tremendous work done chronicling various facets of QAnon, how it started, and the people who believe it; nobody has told the full story of how it grew from an internet conspiracy theory to a political movement bordering on a religion. Given that Q’s mythology has become a principal driver of extremist thought and violence, it’s vital to know how it spread, why its acolytes believe it, and how to help the people left in its wake. And most importantly, we need to know how to spot Q’s next iteration before it becomes as popular as Q.”
With belief in the mythology put forth by Q showing no signs of diminishing, let alone disappearing, even in the absence of Trump and his enablers, Rothschild makes a compelling case that simply to mock or attempt to fact-check the apparent madness of Q’s acolytes will get us nowhere. Rather, his impassioned reportage in THE STORM IS UPON US makes it frighteningly clear that we need to figure out what will be coming next from QAnon and its relentlessly dark worldview—before time runs out on us all.