A CITIZEN’S GUIDE TO IMPEACHMENT by Barbara Radnofsky

When I recommended this book two Christmas’s ago, I wrote: It’s coming. It may be slow, but it’s coming. And now, it’s here!

Let Barbara Radnofsky tell you everything you need to know—the history, the how-to of impeachment. Even that troublesome phrase “high crimes and misdemeanors” is clearly and concisely explained. It’s your best companion for the road ahead. 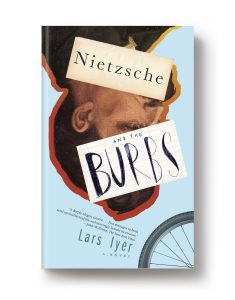 NIETZSCHE AND THE BURBS by Lars Iyer

I’ve worked with Lars Iyer for five books now, and he continues to amaze me with his ability to be both consistent and fresh every time out. What’s consistent is his interest in questioning whether the work of the great philosophers of history has any application to modern life. What’s fresh—in Nietzsche and the Burbs—is where he sets that examination this time: with a group of adolescent philosophers who form a rock band. Throw in a kind of withering British wit, an extra helping of respect for the reader, and the uniqueness of a story with meaning, and you’ll see why we keep publishing this extraordinary writer.

The Climate Report is written for everyone, not just policy wonks, and should be in every home in America. Chock full of four-color charts and graphs, it is THE BEST reference work on the twenty, forty, and one-hundred year impact of climate change on the U.S. I read this the way I read random volumes of the family encyclopedia as a young kid—rapt by the curiosities and astonishing science within its pages. It has made me a better environment activist, and I think most families have science nerds like me who will eat this right up, and maybe just change the world.  7th grade and up.

THE INVISIBLE KILLER by Gary Fuller

Air pollution frequently makes news headlines across the world—earlier this month for example, the Guardian reported air pollution nanoparticles being linked to brain cancer for the first time. 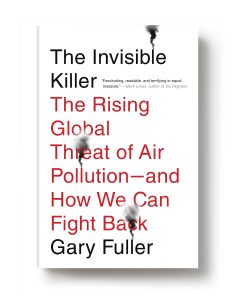 Dr. Gary Fuller is an air pollution scientist at King’s College London, and a leading expert on the subject. The Invisible Killer opens with some horrendous facts: More than 90 percent of the world’s population is exposed to air pollution concentrations that exceed World Health Organization guidelines and globally, four and a half million people died prematurely from particle and ozone pollution in 2015.

So how did we get into this mess, and how the hell are we going to get out of it? Fuller writes with clarity and ease on a topic rich with complexities. He takes us on a historical tour of the world, going back as far as the seventeenth century (yup, air pollution was even a problem then) and taking us right up to the problems facing us all today, what we can each do to improve our own health, and how governments need to take action, now.

It’s eye-opening, fascinating and terrifying all at once. But something we have to understand if we want things to get better. 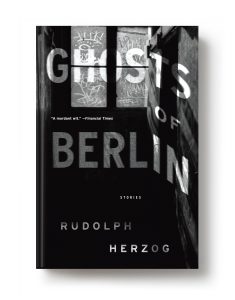 GHOSTS OF BERLIN by Rudolph Herzog

Berlin is a city of desperately complex histories. In his first collection of short fiction, Ghosts of Berlin, Rudolph Herzog brings them all to the surface at once, letting them interact in a way that feels both frightening and oddly cathartic. Although the settings and protagonists vary wildly across the seven stories here—start-up pioneers, yoga teachers, and classical musicians are all subject to hauntings—what unites these stories is a past that won’t stay quiet. Herzog plays with perspective and tone to pleasingly unsettling effect; Ghosts of Berlin is the perfect companion to a long winters’ night reading in the shadows. 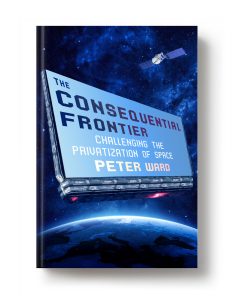 THE CONSEQUENTIAL FRONTIER by Peter Ward

The first book to question the full impact of private space exploration, The Consequential Frontier looks beyond the famous egos of Elon Musk and Jeff Bezos to uncover a whole private space economy—CEO’s, scientists, lobbyists, lawyers, citizen astronauts, and more—ramping up for a cosmic gold rush. It also introduces the dedicated activists looking to keep us from carrying our ugliest impulses toward greed and exploitation into the final frontier.

This deeply reported and entertaining investigation into what may just be humankind’s ultimate question—What kind of mark do we want to make on the cosmos?—is the perfect gift for both the techno-optimist and anti-capitalist on your list this year. 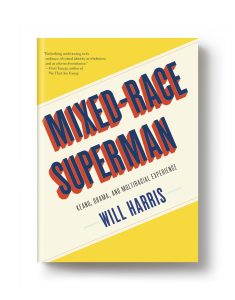 MIXED-RACE SUPERMAN by Will Harris

For decades, the blueprint of a “hero” in pop culture was based on Jerry Siegel and Joe Shuster’s creation Superman. Classically handsome, chiseled face, and bulging muscles. Despite Superman’s origin in Krypton, he was adopted as an American hero and a symbol for the country in World War II. Now, though, we’re seeing a shift in the definition of a hero. In Mixed–Race Superman, U.S. Indonesian-British poet and essayist Will Harris uses two modern hero figures to illustrate the complexities of being multiracial. There is Keanu Reeves—who people seem to overlook as biracial (he’s Canadian with Chinese ancestry). And of course, the indelible Barack Obama, arguably the most famous biracial person in the world.

Not just limiting his cultural observations to Obama and Reeves, Harris includes personal stories of times he didn’t feel as though he identified with racial discussions of the U.S. and U.K. Part memoir, part observational essays, part masterful pop culture examination, Mixed-Race Superman is a short but powerful read for those in your life who want to explore what it means to be multiracial. 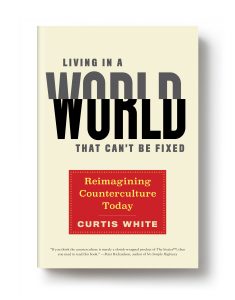 Living In a World That Can’t Be Fixed is a slim, playful, erudite, and funny book that asks us how, in an age of global system failure and total fucking meltdown, do we get free? Curtis White’s admittedly incomplete suggestion is to revitalize the spirit of the counterculture, a spirit grounded in place, in small, functional community building, and in a resolute refusal of the toxic ideologies that have made such an utter mess of things for the last hundred years. In some ways it is a slightly meaner, crankier companion volume to Jenny Odell’s outrageously popular How to Do Nothing. If you’ve already read that (as many of you have) read this!
In my favorite passage, White calls Ken Burns a Richard Spencer-esque nationalist. This irreverent (or rather, impertinent) stab at an icon of middlebrow, milquetoast, liberalism opens a short section on the urgent necessity of transcendental stupidity, and if you’re not already sold, buddy, take a hike.
—Simon Reichley, Director of Operations & Rights Manager

It feels like we’re at least two years into the 2020 presidential campaign, and while this long road can be exhausting, frustrating, intractable, and bewildering, there are also moments that I feel invigorated and ready to engage again. You know, feel fired up… get that burning feeling. One great way to do that is to read Health Justice Now, a comprehensive, artful, and spirited argument for why we need single-payer healthcare now. Timothy Faust got hands-on experience by working as a data scientist in the insurance industry, and he’s been on an endless speaking tour about health justice since. The tone of the book perfectly encapsulates both of these facts: it is equal parts sober, organized explainer, and clarion call for justice. Pick this book up to finally understand the healthcare industry, and stay for sentences like this: “[I]f you care, or if you have been compelled to care, about the health of your people, you must invest in the slow work of liberating all people from poverty; of tiling against the centuries of exploitation and immiseration for profit.” Feeling… that… heat…

BILLIE HOLLIDAY: THE LAST INTERVIEW AND OTHER CONVERSATIONS 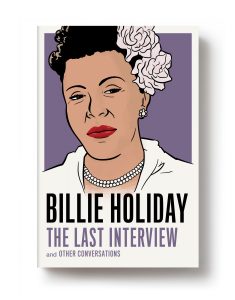 Billie Holiday’s life is often described as a series of tragedies that befell an immensely talented singer. However this collection goes beyond the dramatic oversimplification to present a fuller picture of Holiday. She discusses the early days of her career and why she wouldn’t work with Artie Shaw anymore, what she likes to do when she isn’t singing, and her feelings on the state of the music industry. She also discusses frankly her addiction and takes full responsibility for herself, eschewing attempts at sympathy or blaming showbusiness. If you or someone you know was disappointed to learn about the factual inaccuracies in Lady Sings the Blues several decades after the fact, this is a great opportunity to hear about Holiday’s life in her own words.

JULIET THE MANIAC by Juliet Escoria 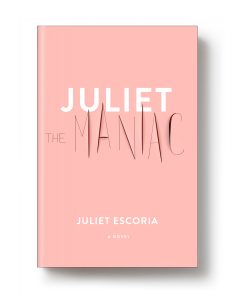 At 14 years old Juliet is a normal kid, getting good grades, hanging out with friends, generally happy—until she begins to unravel. Something inside her changes (she’s later diagnosed with bipolar disorder) and she spirals into a pattern of drug use, anxiety, and self harm. Unable to cope, her parents send her to a therapeutic boarding school.

Juliet’s voice is strong, clear, and unexpectedly relatable. She puts into words the uncomfortable, and oft-seeming indefinable, truth of mental illness. I loved this book. I laughed, I cried, I thought about it for the following six months (and not just because it’s my job to keep thinking about it). Ideally everyone should read Juliet the Maniac, but admittedly it might not be up your great-uncle’s alley. The young woman in your life though? Definitely.

HOW TO DO NOTHING: Resisting the Attention Economy by Jenny Odell 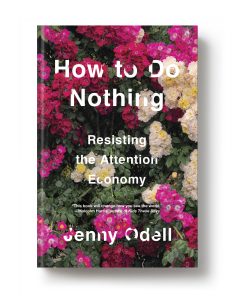 There’s a reason why the New York Times called this book “complex, smart, and ambitious.” There’s a reason why you can find it on the Best Books of 2019 lists over at NPR, Time Magazine, GQ, and Elle Magazine, just to name a few. There’s a reason why Jia Tolentino tweeted that it’s “insanely good.” Here’s the reason: Jenny Odell’s How to Do Nothing is the perfect book for our times. It understands the anxiety living inside of us—that specific anxiety born out of a smartphone around 2010 and intensified after an election in 2016—and it seeks to make sense of it. Will we ever stop mindlessly scrolling through a never-ending feed of memes and advertisements? Maybe not. But in her book, Jenny offers us another perspective at looking and engaging with the forces that steal our attention away from what is good in this world: nature, art, communities. This book will change the way you see things, for the better.

THE REVISIONARIES by A.R. Moxon 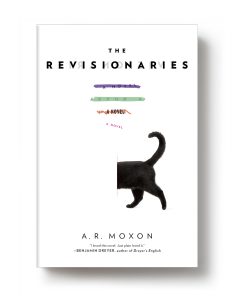 An epic doorstop, A. R. Moxon’s debut novel The Revisionaries is about a group of time-traveling vagabonds, it is in some essential, endearing way gloriously old-fashioned: a big, crazy, adventurous, experimental-but-accessible book of the kind people used to write in the 1970s. What sets it apart from its muzzy forbears, though, is its almost unbearable … humanity; it feels precisely engineered to break your heart. The Revisionaries is by turns cruel, poignant, generous, funny, moving, and violent, and very much the kind of book you want to find yourself alone with late at night, when the wind is blowing outside and the mercury is dropping. It’s just not like anything else you’re likely to read this year.

Fearless and funny Sady Doyle goes deep into history and culture to explore the persisting fear of women and their bodies. What does centuries old fear and violence, and misogyny as its result of it, teach us about patriarchy, Western culture, and this world as a whole? An eye opening, fascinating, profound feminist voice, and an essential read for our time.

THE JOURNAL I DID NOT KEEP: NEW AND SELECTED WRITING by Lore Segal 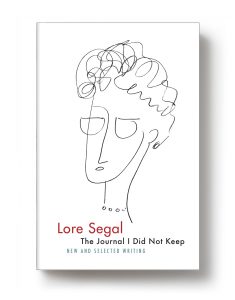 A gift for fans of Lore Segal’s remarkable career, and a robust introduction, for new readers, to a major talent, The Journal I Did Not Keep is a marvel. A collection of stories, novel excerpts, essays, columns, and previously unpublished work, this book’s a rich and rewarding panorama of a writer too often cursed with the designation of “writer’s writer.” Ordinary readers of all ages and backgrounds have as much to learn from Segal’s enchanting voice and mercurial style.