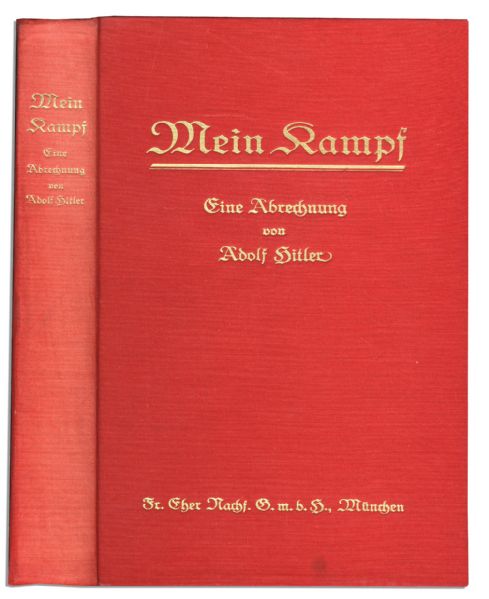 At the end of this month, Bavaria’s longstanding copyright of Adolph Hitler’s Mein Kampf expires. The German state was granted copyright by the Allies in the aftermath of World War II, and since then Bavaria has declined to license reprints of the work in German, though the 5.2 million copies sold during Hitler’s reign have remained in limited circulation. The sale of previously published editions of Mein Kampf has not been officially banned, though public displays of the book are forbidden.

However, anticipating the lapse in copyright law that would allow for the book’s republication, the Institute of Contemporary History (ICHB) in Munich has—since 2012—been preparing a monumental and, predictably, controversial academic edition of twentieth century’s most notorious title.

There are—perhaps obviously—several issues at play, not least of which whether or not white supremacy’s primary text should be made more readily available, especially during a period of rising anti-Semitism in Europe.

There is a stronger argument to be made, however, that confining Mein Kamf to the dark corners of society, sequestered from public discourse and critique, is the more dangerous route.

In an interview with The New York Times‘s Alison Smale, Sven-Felix Kellerhoff, historian and senior editor at the German daily Die Welt, explains:

“The problem with ‘Mein Kampf’ is that everyone knows the title but nothing of the book itself. The myth is that it is banned, and so dangerous that the German public cannot be trusted with it.”

“The false policy of Bavaria gave rise to this myth,” he added, arguing that Bavaria should have lifted the ban at the very latest by the 1980s or 1990s, when a generation had grown up without Nazism.

Given that copyright controls over the book’s publication are soon to expire, why not provide the German public with a critical and historical apparatus with which to evaluate and refute the text?

The edition being published by ICHB is by all accounts an exhaustive dissection of the ideas that laid the groundwork for the horrors of the Third Reich. The 2,000 page, two-volume work contains more analysis and commentary than original text, and is committed to demystifying the allure of Hitler’s cult of personality and discrediting his racist claims. In fact, the original text will occupy only a fraction of the page in the finished manuscript, surrounded by the exhaustive commentary compiled and edited by a team of historians, led by Christian Hartmann.

As Hartmann told The New York Times: “We wanted literally to surround Hitler with our comments.”

Expectedly, the outcry against the book’s republication has been powerful. Stephanie Kirchner at The Washington Post reports:

Regardless of the academic context provided by the new volume, critics say the new German edition will ultimately allow Hitler’s voice to rise from beyond the grave.

“I am absolutely against the publication of ‘Mein Kampf,’ even with annotations. Can you annotate the Devil? Can you annotate a person like Hitler?” said Levi Salomon, spokesman for the Berlin-based Jewish Forum for Democracy and Against Anti-Semitism. “This book is outside of human logic.”

Charlotte Knobloch, head of the Jewish community in Munich, said, “This book is most evil; it is the worst anti-Semitic pamphlet and a guidebook for the Holocaust,” she said. “It is a Pandora’s box that, once opened again, cannot be closed.”

Magnus Brechtken, deputy directory of the ICHB, acknowledged the opposition’s concerns, but remains committed to the publication of the book, and to the importance of open discussion:

“I understand some immediately feel uncomfortable when a book that played such a dramatic role is made available again to the public…On the other hand, I think that this is also a useful way of communicating historical education and enlightenment—a publication with the appropriate comments, exactly to prevent these traumatic events from ever happening again.”