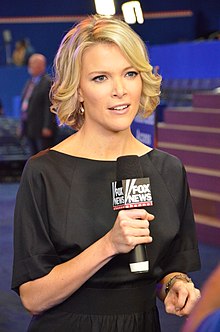 According to science, there are a near-infinite number of possible universes, all of which exist in kaleidoscopic, eleven-dimensional parallel to each other. Unfortunately, of all the gazillion possible versions of twenty-first century America, we live in the one where the Amazon reviews of Fox News star Megyn Kelly’s newest book are a legitimate news story. Also the one where a quasi-sentient pile of radioactive cheese curd is the President elect.

Kelly’s new memoir, Settle for More, was published by HarperCollins last week. Almost immediately, the Amazon page for the book was overloaded with venomous one-star reviews. It had fallen victim of the same bug-eyed and hate-driven beast which recently put a know-nothing autocrat in the White House: the internet. According to reports in the L.A. Times, Slate and the Huffington Post, members of the Reddit subgroup “The_Donald” organized the petty smear campaign and were responsible for the wave of negative reviews.

At Slate, Katy Waldmann claimed that more than seventy-six percent of reviews of the book were one-star, before Amazon, under pressure from Kelly’s publicist, undertook an audit of the page and culled many of the most obviously bullshit reviews. At the time of writing, Settle for More has 231 customer reviews, and has earned an aggregate 4.5 star rating.

This is of course, the world we live in now. As pointed out in Maddie Crum’s Huffington Post piece, “a small, angry, vocal group can flood a space with fringe views that masquerade as majority opinion” (add: or as President). And, before we forget, this kind of behavior is a deliberate effect of Trump’s nearly two-year-long campaign against the “establishment media” and its representatives. As Melville House author Joshua Stephens suggested on this blog yesterday, Trump has a consistent long game that consists of cultivating a particular type of “aggrieved collective identity… and its corresponding self-narrative.” This kind of coordinated political hatchet job (crude and juvenile as it might seem) is precisely and expression of that identity, and an exercise of that narrative.

What’s worse is that there very little institutional action you can take to counter this kind of thing. Amazon silently culling those reviews proves the point to many of those aggrieved and vocal “activists,” and the more you shame them, the stronger they become in their belief that they have been unfairly set upon by a liberal-totalitarian nanny state.

Which is all to say that I am devoting myself utterly to the task of finding a terrestrial wormhole, which I can use to punch my way into any other universe than this.