Meghan Markle’s kid’s book is finally out… and yup, the Brits hate it 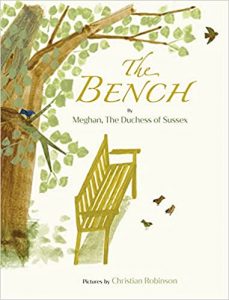 Last month we wrote about Meghan Markle’s forthcoming children’s book The Bench and how before it had even hit the shelves, it was being panned by the British tabloids. Well now the book has been officially published, how has it been received?

The Bench hit number one on The New York Times Bestseller list for children’s books, and in the UK has topped the chart for the bestselling picture book. However, many journalists have taken great joy in reporting that it failed to make it into the bestselling top 50 UK books, being outsold by footballer and campaigner Marcus Rashford’s book You Are a Champion: How to Be the Best You Can Be. As as The New York Times succinctly put it, “There is also her status as Public Enemy No. 1 in the British tabloids, some of which seemed thrilled at an opportunity to rain fresh criticism upon her.”

Let’s take a look at the reviews to judge for ourselves, shall we?

“semi-literate… One wonders how any publisher could have thought fit to publish this grammar-defying set of badly rhyming cod homilies, let alone think any child anywhere would want to read it. But that’s planet Sussex for you, where even the business of raising a family is all about the brand.”

“Meghan Markle’s children’s book The Bench is branded ‘bland’, ‘shallow’ and ‘uninspired’ by US readers as it fails to move past number 100 on Amazon’s bestseller list after being met with abysmal reviews in the UK.”

“The Duchess of Sussex’s writing is soothing, loving, although a little schmaltzy in places, but did at one point bring a tear to my eye.”

“It’s sentimental and a bit of a tear-jerker for adults, but what’s the verdict from the intended audience?… While the older children enjoyed The Bench – with one saying it made them “feel happy”, the story failed to grab and keep the attention of the younger kids, notoriously a tricky crowd…. The painterly illustrations give the book a lot of heart, and it’s clear they’ve worked to make the characters in the book as diverse and inclusive as possible, including fathers of different skin colours, religions and a wheelchair user.”

“It is mind-boggling, really, how bad the book is. There is no story, just a series of platitudes about paternal love that at best might appeal to a highly emotional father, insecure in his new role… It makes for a beautiful gift – for Harry. Just not for anyone else.”

“That it had me and my colleagues in hysterics at how appallingly written it was, and how poor the illustrations were, made no difference to its undeserved success. A star name sells books.”

“The Bench, which has an average rating of four stars online, was inspired by a poem the Duchess of Sussex wrote about Prince Harry’s first Father’s Day … the book sold just 3,212 copies in its first week and failed to make it into the best selling top 50 … However it did top the chart for the best selling picture book.’

So the verdict? The majority of the British press has not taken kindly to the book, no matter their political persuasion (with the left perhaps slightly less toxic), enjoying pointing out it has not become an instant bestseller. However, as Tom Tivnan, Managing editor of The Bookseller told The Mirror:

“The aim is the long game as picture books tend to have a longer shelf life than adult titles. The idea is to keep them selling week in and week out and is not about a quick hit.

“Meghan’s was the bestselling picture book of the week, though as it sold 500 more copies than Julia Donaldson’s What the Ladybird Heard at the Seaside.”

Perhaps its seeming lack of appeal to its target audience is a problem. Perhaps its lack of rhythm could have done with addressing. As The New York Times puts it:

“The Bench is a sweet little tale. Meghan’s message is heartfelt: Life is happy and sad, and a father can be there for it all. But a heavier editing hand would have been a big help. There is no excuse, in a book of fewer than 200 words, for every syllable not to be just right. Even a tiny discordant note can throw the whole thing into disarray.”

It’s clearly not going to pass into the canon of classic literature, nor was that ever its designed purpose. Does it, however, deserve the sheer vitriol clear in many of the UK reviews? It seems this kind of level of hate is reserved for a public figure the press have already made their biased minds up about, no matter the state of the book itself.