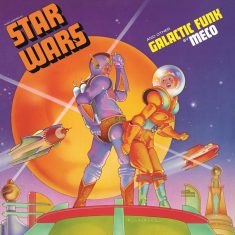 In my upcoming book Strange Stars: David Bowie, Pop Music, and the Decade Sci-Fi Exploded, I of course talk a lot about David Bowie. But I cover tons of other sci-fi-influenced musicians of the seventies as well — and there’s a whole chapter that centers around Star Wars’ impact on popular music.

When it comes to Star Wars music, the first thing that usually springs to mind, besides John Williams’s majestic score itself, is Meco’s disco version of the film’s theme song. Released in 1977, “Star Wars Theme/Cantina Band” became the number-one single in America just five months after Star Wars hit theaters.

It just so happened that 1977 was also the year Saturday Night Fever turned disco from a trend into a phenomenon. Science fiction and disco, independently of each other, became mainstream lifestyle choices in 1977 thanks to Stars Wars and Saturday Night Fever, so it was inevitable that the two would somehow dovetail.

Domenico “Meco” Monardo was a lifelong sci-fi fan and disco producer by trade when he was struck senseless by Star Wars in May of ’77. Like millions of Americans, he would stand in line to see the movie multiple times in the coming months.

When Meco approached record label executives with the idea for Star Wars and Other Galactic Funk—the album whence “Star Wars Theme/Cantina Band” sprang—he was repeatedly turned down. It sounded like a crazy idea. But Meco persevered, and eventually his perseverance paid off.  At least monetarily.

The runaway success of “Star Wars Theme/Cantina Band” spawned tons of imitators, and it also pigeonholed Meco into doing discofied versions of sci-fi movie themes, the next being 1977’s Close Encounters of the Third Kind. He branched out, albeit slightly, with his 1979 album Moondancer, which was based on an original if sketchy concept about a discotheque on the moon.

Moondancer wasn’t a movie theme, but it marked the point at which Meco seemed resigned to being labeled, dismissed, and restricted as a sci-fi musician — ironically one of the world’s most popular, a musician trapped by his own triumph.

It’s been generally accepted ever since that Meco’s Star Wars and Other Galactic Funk is a novelty record, a piece of opportunistic, dollar-chasing dreck. Actually, the opposite is true. It’s a work of superb musicianship, intricate arrangement, symphonic scope, and interpretive imagination, and it was nominated for a Grammy Award in 1978, losing in all fairness to John Williams’s original Star Wars score. Above all, it was fueled by a deep passion for its source material, before anyone realized its true commercial and zeitgeist-capturing potential.

“Star Wars Theme/Cantina Band” is, for all intents and purposes, fan fiction in song form, in the best possible way. And on this Star Wars Day, it’s a better time than ever to drop the needle on the record (literally or figuratively) and boogie across the galaxy.