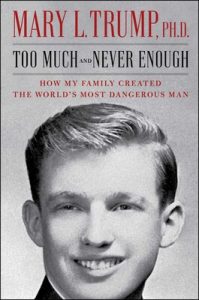 Mary Trump’s earthshaking new tell-all fittingly titled Too Much and Never Enough: How My Family Created the World’s Most Dangerous Man, despite Donald Trump’s attempts to impede its release, is receiving an expedited release by Simon & Schuster slated for July 14th.

Discussion of this book’s release has come to a head in Mary’s long history of speaking out against her uncle. Recent court filings have brought into question the validity of non-disclosure agreements Mary signed in the past. Two years ago, she corroborated evidence of the president’s shady tax schemes in a bombshell New York Times article. Needless to say, the upcoming tell-all contains damaging information on the president and has illuminated that, despite all attempts to thwart its release, it deserves to be read.

Mary L. Trump, a licensed clinical psychologist, is the daughter of Trump’s older brother, Fred Junior, who passed away at the age of 42 from a heart attack due to alcoholism. In her book, Mary discusses shrouded details of the Trumps’ fraught family life, including Donald’s upbringing and subsequent abuses of family assets. Mary’s perspective is titillating as it is divisive. In the book’s prologue she writes, “In addition to the firsthand accounts I can give as my father’s daughter and my uncle’s only niece, I have the perspective of a trained clinical psychologist.”

Since the book’s unveiling, the president’s brother, Robert Trump assumed legal action to bar the book from publication. Robert had taken the case to the Queens County Surrogate Court with no avail, but saw some success at the New York State Supreme Court. They won an injunction against Mary and Simon & Schuster temporarily blocking the book’s publication. The New York State appellate court lifted the ban a day later.

The case is ongoing as a restraining order remains on Mary, but her attorney Ted Boutrous stated on Reliable Sources that he is confident the order will be lifted because, “The Supreme Court has never upheld a prior restraint in any case in history where political speech was involved.”

Mary’s spokesperson Chris Bastardi, spoke on her restraint saying, “The act by a sitting president to muzzle a private citizen is just the latest in a series of disturbing behaviors which have already destabilized a fractured nation in the face of a global pandemic. If Mary cannot comment, one can only help but wonder: what is Donald Trump so afraid of?”

Indeed, if the tell-all proves to be so damning to the president, wouldn’t all attempts to nullify Mary Trump’s right to the press be just as damning?

Too Much and Never Enough is now the top selling book on Amazon, surpassing John Bolton’s recent The Room Where It Happened. Although it awaits publication, tens of thousands of copies are ready to ship across the nation.