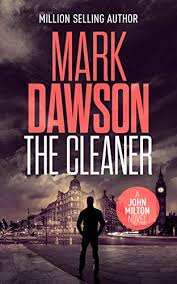 British author Mark Dawson has been accused of “gaming the system” by purchasing four hundred copies of his new book, The Cleaner, to distribute to people abroad who presumably expressed interest in purchasing copies from him.

Alison Flood’s article in the Guardian about the matter remains neutral and succinct, featuring points of view from Nielsen—the company that determines books’ rankings—a link to a since-deleted accusatory tweet from an author whose name I will now never know, and a statement from Dawson himself. This controversy really seems to polarize people who are invested in the numbers, and since I’m not one of those people, I thought I’d have a bit of fun diving into this fracas.

I thought I’d start with instinctive reactions to the story so, naturally, I searched Dawson’s name on Twitter. Most people had a negative gut reaction to Dawson’s wily designs, as did I upon first reading about his motives. Dawson did, by his own admission, devise his plan for the purpose of getting into the Sunday Times top ten. There is an important caveat to this, though; he initially gauged interest in the overseas market before doing so. The books had a destination and as he says, he wasn’t just, “sitting on them.”

To purchase and distribute copies of one’s own book to a foreign market for the sole purpose of raising one’s Sunday Times ranking is practical in an almost Machiavellian sense, sure, but in my opinion, it stops short of flat-out “cheating.”  What Dawson did do is chip at the ideal of publishing as a meritocracy.

As another Guardian article notes, Dawson’s strategy is not uncommon among authors and/or their publishers who are set on making Bestseller lists. This, of course, is not surprising. Publishing, like most areas of cultural production, is largely a pay-to-play industry. One must have the means to dedicate themselves to writing; one must exist in the right spaces to meet the right people to get their books in front of the right audience before turning a profit. This is the crux of the problem: worthy talent routinely goes untapped because the industry is not built on merit. Perhaps more frustratingly, mediocrity often gets undue time in the sun because it is helped along by these same structures.

In my opinion, people’s objections to Dawson’s actions are undergirded by the ideal that publishing should be a meritocracy. This is a noble ideal that should be upheld, but to believe that top publishing companies, if not bestselling authors themselves, have not engaged in similarly cutthroat practices to move copies strikes me as a tad naïve. One may even argue, for argument’s sake, that Dawson did for himself what a foreign distributor would have done for him.

Still, the public outcry and Nielsen’s subsequent demotion of Dawson’s book do provide evidence that the ideal of meritocracy is alive and well. People’s instinct that it is unfair that an author who has the means to boost their rankings may do so using their own private funds seems to be the correct one. Maybe it would have been more commendable for the book to have been picked up by a foreign publisher or distributor based on its own merit (which may deflate my claim that publishing is not the meritocracy we’d like to believe it is). Ultimately this response is a good thing, and hopefully bodes well for the future of publishing, wherein the inflation of sales purely for the sake of making it onto a list will not be tolerated by large companies either.

In my opinion, though, reading the discourse among bestselling authors about this particular controversy feels a lot like seeing the top students in a graduating class trying to edge each other out for the coveted valedictorian spot. Watching from elsewhere in the pack, their contest strips the title of its value and its merit starts to feel equal to, if not outweighed by, the pure strategy required to obtain it.