Margaret Atwood and readers see a Trump in The Handmaid’s Tale, and sales go through the roof 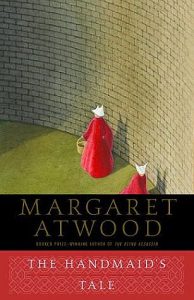 There’s always some excitement surrounding the prolific and celebrated author Margaret Atwood. It’s only right. But this has been especially true recently. One reason is, there’s that television adaptation of The Handmaid’s Tale coming in Spring 2017 to Hulu (not to mention that adaptation’s Super Bowl commercial).

And another reason is that there’s this rising tide of American dictatorship, all of it in bad suits and bad humor and too-long ties, mouth-frothing around the White House (and also, recently, extremely problematically, Trump’s Mar-a-Lago resort in Tampa). Much of it resembling—yes, you guessed it—The Handmaid’s Tale. Cool?

As The Hill’s Brooke Seipel reports, Margaret Atwood is not unaware of this resemblance. In an interview with Reuters’ Sarah Marsh, Atwood remarks that “when [the book] first came out it was viewed as being farfetched… However when I wrote it I was making sure I wasn’t putting anything into it that human beings had not already done somewhere at sometime.”

“We think as progress being a straight line forever upwards… But it never has been so, you can think you are being a liberal democracy but then bang you’re Hitler’s Germany, that can happen very suddenly.”

This, and that forthcoming television series, is why The Handmaid’s Tale is, over thirty years since its original publication, selling alarmingly well once again. And this is why publishers have backlists.