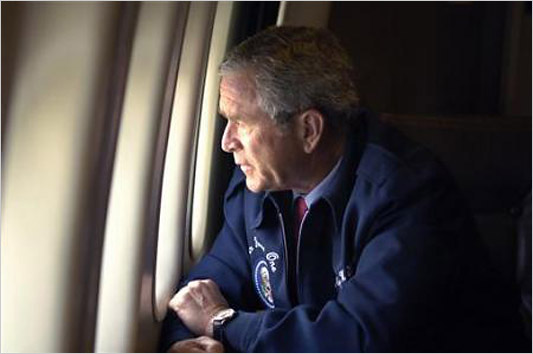 Over the holidays at The London Review of Books, Eliot Weinberger provided a delightfully detailed evisceration of George W. Bush‘s Decision Points. At one point, Weinberger compares Bush’s prose to that of Melville House author, Tao Lin:

Occasionally, someone on Team DP will insert a lyrical phrase – the tears on the begrimed faces of the 9/11 relief workers ‘cutting a path through the soot like rivulets through a desert’ – but most of the prose sounds like this:

I told Margaret and Deputy Chief of Staff Josh Bolten that I considered this a far-reaching decision. I laid out a process for making it. I would clarify my guiding principles, listen to experts on all sides of the debate, reach a tentative conclusion, and run it past knowledgeable people. After finalising a decision, I would explain it to the American people. Finally, I would set up a process to ensure that my policy was implemented.

There are nearly 500 pages of this, reminiscent of the current po-mo poster boys, Tao Lin, with his anaesthetised declarative sentences, and Kenneth Goldsmith with his ‘uncreative writing’, such as a transcription of a year’s worth of daily radio weather reports. Foucault notes: ‘Today’s writing has freed itself from the theme of expression.’

In some ways, we feel the comparison is apt. Tao Lin‘s latest novel, Richard Yates, is a precise and unsettling account of a dysfunctional and doomed relationship… and what relationship was more doomed and dysfunctional than the one between Bush and the American people? Also Richard Yates is an essentially depressing novel (despite all its wit and freshness and timeliness and hype), and any intelligent reader of Decision Points will find themselves deeply, deeply depressed.

But in other ways we object to the comparison. Decision Points is, as Weinberger points out, a book about a single, triumphant, purposeful “hero” whereas Tao Lin’s fiction fiercely defies the concept of heroes, and triumph, and perhaps even purpose. And finally there is this dramatic difference: in one of the most inspired moments of Richard Yates teenage “Dakota Fanning” sends “an email of all her lies.” What follows is a five page litany of deceits and trespasses:

One of the times when I said I listened to the songs you recorded for me on the way home on the bus I lied and just said that to make you feel better. I listened to other music instead…. The day I went to the movies by myself I only walked to about Wendy’s and one of my brother’s friends saw me and gave me a ride to the theatre…. The day you recorded piano for me I told you I was getting changed then exercising. Instead I binged and threw up.

Clearly, we will never get a such a list from George W. Bush, even though his list would go on for a lot longer than five pages. Tao Lin, for all the affectless of his prose, knows a thing or two about the human capacity for treachery and self-deception–something Bush adamantly refuses to confront, even as he sits down (theoretically) to write about all his accomplishments and all his sins.