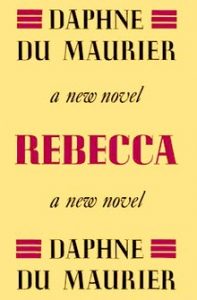 Daphne du Maurier is perhaps best known for her novel Rebecca, and her short story “The Birds.” The former won the 1939 National Book Award, and both received major film adaptations by Alfred Hitchcock. Though her body of work includes many more novels, stories, and non-fiction, we tend not to associate her with poetry.

A recent discovery, however, has unearthed some poems written by a younger du Maurier. The poems—one untitled, and one called “Song of the Happy Prostitute”—were found during the cataloging of a set of letters to be auctioned by Rowley’s of Ely on April 27th.

The two unknown poems were found tucked underneath a photo of a young Du Maurier in a swimming costume standing on rocks, which was part of an archive of more than 40 years of correspondence between the author and her close friend Maureen Baker-Munton, now put up for auction by Baker-Munton’s son Kristen.

Auctioneer Roddy Lloyd was cataloguing the archive when he looked more closely at the photograph. “We were going through the last box of documents on my kitchen table, when for some reason I decided to take the picture out to have a better look. When I took it out of the frame, out popped these poems,” said Lloyd. “It looks like they’re from around the 1920s.”

Truly the stuff of a great literary ephemera mystery.

While the poems will certainly appeal to the reader interested in du Maurier’s writerly and intellectual development, the letters themselves offer a deep look into du Maurier’s life, including her desire to stick with her husband through his affairs and alcoholism, her feelings after his death, and her intimate relationships with women. As one of the discovered poems puts it “For God! how dull it is to rest alone.”