Following the election of The Boss Baby, Locofo Chaps, an imprint of the Indiana-based poetry press Moria Books, made the decision to get Donald Trump’s first hundred days down in writing — more specifically, in verse. And a protest-through-poetry project was born: for every single day of Trump’s first hundred, they published a chapbook written by a different poet.

The result, no surprise, is a “wide range of voices in conversation,” poet Garin Cycholl tells Rebecca Aydin at the Chicago Tribune, all of them in protest. (116 voices, in fact. Some days, to the surprise and delight of Moria editor William Allegrezza, could not be bound by one chapbook alone.) Poets were encouraged to render their subject—the Big Cheese and the actions of his administration—using their own literary approach, focusing on the issues they thought most urgent, and ripest for poesy. 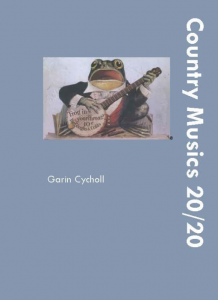 Cycholl, for example, combined political rhetoric, country music, and Franz Kafka in his contribution, Country Musics 20/20. Travis Macdonald’s How to Zing the Government fashions itself after a heavily-censored government document (think the Torture Report, which the Trump administration is doing its best to make disappear)—but with the colors inverted. White paper is turned black. Black ink is printed white. Redcations illuminate, rather than conceal, a document’s secrets — as poetry. From Travis Macdonald’s How to Zing the Government

Aileen Cassinetto’s Tweet, which is as playful and wry in tone as we wish Twitter still was (this tone is echoed by the book’s childlike, almost Comic Sans typeface), explores quite seriously the fact and history of diplomatic speech as (a kind of) poetry. (Bonus: it also features a thinly-veiled Melville House author, David Cay Johnston, author of The Making of Donald Trump, as “David Cay Boyle,” winner of “the 2001 Pulitzer Prize for Beat Reporting #notfakenews”) 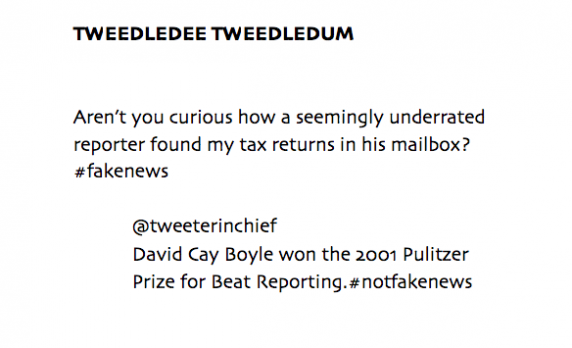 And that’s just the beginning. According to Allegrezza, people all over the world are reading these chapbooks, from Paris, Texas to Paris, France. Why? Because, he says, they “give a voice to what other people are feeling and galvanizes a protest of the administration.” That’s a great and powerful thing! So I invite you now to join us. All of the books are available as free PDFs or to purchase in print. And if you happen to be in Chicago this weekend, consider this: this Saturday, at 7 pm, make your way to Myopic Books, where a number of these chapbooks will be read and, no doubt, if only for just a few minutes, things will be good again.