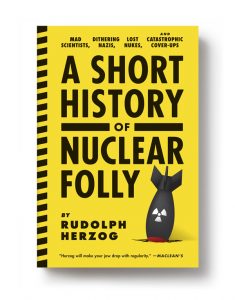 Back in April, we wrote about an article Melville House’s own Rudolph Herzog had published in Foreign Policy, urging his native Germany not to build an illegal nuclear arsenal. Herzog’s arguments that threat of nuclear annihilation should not be used as a basic unit of diplomacy were, like clockwork, called “indulgent fantasies” by a conservative critic. This week, with America’s lunatic president threatening “fire and fury” against a nuclear-armed North Korea, and stirring long-dormant memories in the US of how it feels to live under the threat of nuclear violence, we thought we’d revisit the piece.

Last week, antifascist filmmaker, author, and Melvillean in good standing Rudolph Herzog did one of the things he does best: walked right up to a jaw-dropping conversation about nuclear armaments, and injected a much-needed dose of reality. The injection took the form of an impassioned, eloquent piece in Foreign Policy; the conversation, in this case, was one currently burgeoning in Germany over whether that country should acquire nuclear weapons in response to Donald Trump’s incoherent bellicosity about NATO, the international military alliance on whose protections German security presently leans.

Since Germany is a signatory to the Treaty on the Non-Proliferation of Nuclear Weapons, Herzog notes, acquiring the bomb would make it a “rogue nuclear state” and cost it “much of its hard-won credibility in soft power.” He gives a quick, harrowing history of close nuclear calls—incidents, spanning the entire Cold War, in which the US and USSR came jaw-clenchingly close to resolving their differences through the pulverization of atoms—before observing Germany’s special place in the conflict: because of its reliable loyalties and proximity to Moscow, it was where many nuclear-armed American rockets were stored after World War II, becoming the lynchpin of what Herzog calls the “hair-trigger configuration” of mutually assured global destruction. “Germany,” he writes, “had a big ‘X’ painted on it, and its inhabitants, though largely ignorant of the terrifying details, were keenly aware of this.”

Just a few days later, a response came from political scientist Maximilian Terhalle, one of the commentators Herzog had quoted as leaning “pro” on Germany’s nuclear question. (“This is about our vital interests,” Terhalle had written, echoing the sentiments of every person in a toga, crown, or necktie who has ever goaded a nation needlessly toward war.) In a not-so-witty retort published by Foreign Policy, and later picked up by the Chicago Tribune, Terhalle, seemingly without a moment’s hesitation, bangs a shoe to resuscitate a patently outdated, terrifyingly manichean Cold War logic.

Rudolph Herzog. Honsetly, you have to be a monster to argue with this man.

If you think I’m exaggerating, read the article. Terhalle opens by calling Trump’s NATO prattle a “five-alarm fire” for “anyone… who cares about the future of Europe.” Next, he praises the “inherent terror of nuclear weapons” as a potential boon to Germany’s security. As for Germany’s vaunted soft power, Terhalle writes that the nation’s European neighbors “don’t want lecturing but a more engaged and militarily active Germany,” citing the example of former Polish Prime Minsiter Jarosław Kaczyński, the reactionary, not-wholly-un-Trump-like scourge of that nation’s moderates and progressives. He counsels against Germany’s seeking another alliance with a nuclear power like the UK or France, because, he says, these nations can’t be trusted to meet their commitments. He concedes Herzog’s point that Germany’s nuclear armament would be illegal, but suggests that, “with NATO becoming ‘obsolete,’ the times are rapidly and drastically changing” — dine-and-dash logic on a vertiginous scale.

Perhaps the ugliest dimension of Terhalle’s piece is its technocratic embrace of a long-discredited political outlook that sees nuclear proliferation as a strategic bargaining chip, rather than, y’know, an unmitigated catastrophe of historic proportions. Which, simply, is madness. Even Henry Kissinger has come around on this. Herzog’s article (like his excellent book A Short History of Nuclear Folly) enumerates times the world may have come within a single head-shake of total destruction; Terhalle’s response is basically “ok, but we’re still here,” which just isn’t good enough. And tellingly, while Herzog reports seriously on the extreme unpopularity of nuclear weapons in Germany, from which “85 percent of Germans advocate that all U.S. nuclear weapons be removed,” Terhalle just waves his hand, insisting we have no time for “indulgent fantasies.”

The reality, we know, is that the high-stakes game of Risk atomic bureaucrats spent much of the twentieth century playing never brought the world anything but peril; we owe our survival not to the wisdom of that system, but to a few cooler heads, a baseline human instinct against leveling entire cities, and, indeed, a heaping tablespoon of dumb luck. That some—in Germany, of all places—are openly pining for the security they felt with their legs dangling off the nuclear brink seems a measure of just how regressive global political dialogue has become.