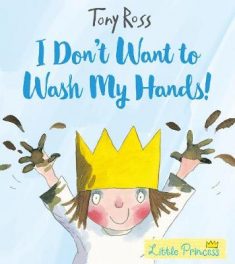 The Little Princess has been a perennial favourite with kids across the world since publication of the first book in series, I Want My Potty, in 1986. Following the escapades of a spoiled young princess as she learns life lessons, there are 40 book in the series, written and illustrated by Tony Ross, which has also spawned an animated television series and a multitude of merchandise.

Despite its vintage, I Don’t Want to Wash My Hands, originally published in 2002, has recently experienced a revival. According to the Guardian, sales increased by over 2000% in February and March after hand-washing instructions permeated society during the coronavirus outbreak. Ross recently wrote a piece for i newspaper about the second life the book is experiencing and the unexpected joy this has brought during difficult times.

‘I wrote and illustrated I Don’t Want to Wash My Hands 20 years ago and since then many parents must have identified with the battle to keep small children clean.

It’s very strange to me that all these years later the book is having a second life, and in the midst of our current situation parents are again buying it to help get them through the day with their kids, but that’s the way of books – they do their own thing once they are out in the world, much like children!’

Ross was inspired to create the first Little Princess story when his daughter refused to leave her potty to go to bed, and other titles in the series are based on his experiences. Millions of copies have now sold, translated into 31 languages, and Ross has worked with many famous children’s writers over the years including Roald Dahl, David Walliams and Jeanne Willis.

I Don’t Want to Wash My Hands has been so popular of late it is now out of stock on Amazon, publisher Andersen Press telling the Guardian a hasty reprint is underway, staffer Paul Black saying:

“We’re in strange times and all just trying to find our way through it – now more than ever with children at home and parents feeling the pressure of home-schooling as well as working from home, it appears that books are helping people have open and honest conversations with youngsters, without being too dramatic and scaring them. From all the guidelines we know washing our hands is the biggest thing we can do to help stop the virus spreading. Maybe if it’s a character many children know and love it makes it all a bit easier – and less scary – for them to process.”

Ross himself is now safely ensconced at home, watching his creation take flight once again from afar, as she shared with the i newspaper:

“Right now I am self-isolating, although I like to go out, and I keep the advised distance from others, trusting that those who govern and advise us know what they are talking about. But one day, the sun will shine, and we will have crumpets again for tea.”