Linda Sarsour “will not submit to fear” In February we reported on the efforts of Linda Sarsour—“working woman, racial justice and civil rights activist, every Islamophobe’s worst nightmare, and mother of three”—to raise money for the Jewish Chesed Shel Emeth cemetery in St. Louis, which had been vandalized with anti-Semitic threats.

Now, Jake Offenhartz reports for Gothamist, in a distressingly predictable turn of events, she’s been accused of withholding or redirecting the money she helped raise. While Sarsour has provided detailed accounts of the funds’ distribution (which have in turn been confirmed by the recipients’ representatives), Brooklyn Assemblyman Dov Hikind insists “proof is coming.” On his Facebook page, Hikind writes: 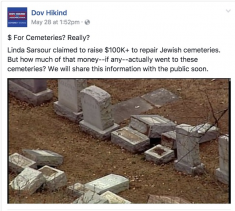 “I’m not afraid of [Hikind],” Sarsour said, “I’m afraid of those he unleashes.”

Nonetheless, she’s standing strong: “I’m [his] worst nightmare — a progressive, Palestinian, Muslim American woman. I will not submit to fear.”

Sarsour is also a contributor to our book What We Do Now, available here.