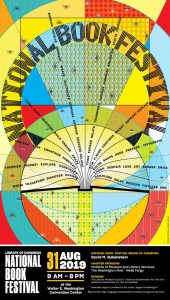 This year’s National Book Festival, a free annual event hosted by the Library of Congress, was already set to be a hit with big names like Ruth Bader Ginsberg and Barbara Kingsolver headlining. But now, according to Gaspard Le Dem reporting for DCist, the library is adding on a series of events that will last a year.

“With the incredible success of the National Book Festival, we aim to engage even more readers of every age all year long with timely programs that celebrate storytelling, books and creativity,” said Librarian of Congress Carla Hayden in a press release. “National Book Festival Presents will feature a wide variety of subjects for diverse audiences and will highlight groundbreaking works in the humanities and science to fuel our ideas and imaginations.”

First up: Neil Patrick Harris presenting his book The Magic Misfits on September 11.

The series, called National Book Festival Presents, is more ambitious than I’d have imagined possible. From Joy Harjo to Alexander McCall Smith to Edwidge Danticat, the series is packed with big names across genres. Here’s the Fall 2019 lineup:

You can stay up to date on the festival by following their blog.