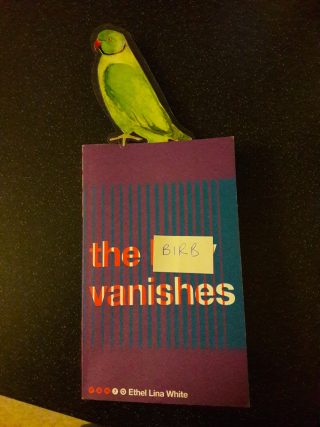 A very very good and, it turns out, comparatively normal bookmark

What’s the weirdest thing you’ve ever used as a bookmark? A feather? A candy wrapper? An old photograph of a man’s rear end? (The latter is not just idle conjecture; I once found a second-hand copy of Humboldt’s Gift that contained exactly this)… I’m sure you think you have some pretty wacky answers to this question. I personally favour a laminated watercolour picture of a ring-necked parakeet, given to me by a dear friend (right).

But I’ve never once even considered using a Kraft single, just one of the many bizarre and seemingly logistically impossible objects that Lynsi Burton lists in SFGate this week, inspired by an exasperated tweet from Washington librarian Anna Holmes, and subsequently mentioned on the NPR game show Wait, Wait, Don’t Tell Me.

It’s a piece that raises a lot of questions. Chief among them: What drives a person to consider a slice of cheese an acceptable bookmark? So, in the spirit of serious investigation this site is renowned for, I’ve listed some of the more eye-catching objects mentioned in the article below — along with some potential scenarios that might have resulted in them being used. Apologies in advance.

I fear this exercise may have raised more questions than it answered, and for that, I can only apologise. But the message is clear, guys: next time you need to mark the page of a library book and find yourself reaching for a perishable foodstuff: have a word with yourself and maybe just remember what page you were on? But never, ever fold the page over. We might live in a world where people use chicken legs as bookmarks, but we’re not savages.