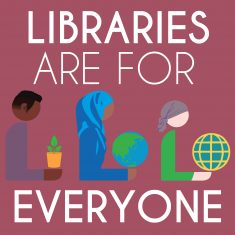 We’ve already written about the incredible work that librarians are doing on the front lines of the fight against fake news. But their resistance against the current administration is also more immediate, more direct, and more far-reaching than that effort. Elizabeth Flock at PBS NewsHour took a look at what libraries across the country are offering their communities, from protests to sanctuary.

Librarians found the executive orders aimed at immigrants particularly offensive, because, as Massachusetts librarian Elizabeth McKinstry told Flock, “We are huge resources for newcomers to this country, whether it’s for connection to this country, legal resources, testing preparation, citizen tests, services like storytimes or homework help. We are there for the most vulnerable folks in our communities, people on the other side of the digital or language divide.”

And so, after the two executive orders, librarians across the country began responding with individual acts of resistance at their branches. In Cambridge, Massachusetts, which has been a sanctuary city since 1985, the public library announced that it would be a sanctuary space. At the Hennepin County Library in Minnesota, which serves a large population from Somalia, one of the seven countries affected by the travel ban, a campaign was launched called “All are welcome here.” The library serving Multnomah County, Oregon, began promoting books about immigrant and refugee experiences for kids; elsewhere in Oregon, librarians put “all are welcome” buttons on sale. At the William Jeanes Memorial Library in Pennsylvania, a Yemeni-American, Muslim-American girl doll named Sameerah became available for checkout. “We are glad to welcome her to our library,” librarian Rachel Fecho wrote online, and said, with evident sarcasm: “She is able to travel freely to the homes of our library patrons.”

Rebecca McCorkindale, assistant library director in Gretna, Nebraska, created a series of images under the banner “Libraries are for Everyone,” and was happy to see that libraries in every corner of the country were displaying them.  “Libraries are the heart of a community, for anyone and everyone that lives there, regardless of their background,” she told Flock. “And so we strongly believe that libraries are not neutral. We stand up for human rights.”

Matthew Haugen, librarian at Columbia University started a LibrariesResist twitter account, to highlight and amplify local acts of resistance, as well as resources. Already, those resources include “pages on privacy and surveillance, fake news and propaganda, a ‘Stop Trump’ reading list and a ‘Trump syllabus’ as well as an explanation of libraries as sanctuary spaces.”

Flock points out that librarians aren’t new to resistance. In the fifties, the ALA created the Freedom to Read Foundation to fight censorship. In the sixties, the association founded the Social Responsibilities Round Table to respond to numerous issues; a primary focus was improving library access among the black community, and increasing the number of black librarians. They broadened the focus in the eighties to include women’s and gay rights.

During the George W. Bush administration, the ALA fought back against the Patriot Act.

Perhaps the moment when librarians are best remembered as activists, though, came in 2001, when the ALA fought back forcefully against the Patriot Act, which expanded the powers of government surveillance in the wake of the 9/11 attacks. Librarians were particularly vexed over Section 215 of the act, colloquially called the “library records provision,” which required librarians to hand over patron data when law enforcement asked for it. The act also included a gag order that said librarians could not tell patrons they had forked over their data.

In response, librarians began hanging signs for library patrons telling them that the FBI could be watching them. They also lobbied electronic vendors to add privacy measures, and in 2005, took the fight over the gag order to court. By 2006, the government had given up its fight to protect that order.

The future of library funding may be unclear, but what is clear is that librarians will continue making their libraries inclusive and accepting spaces for all.