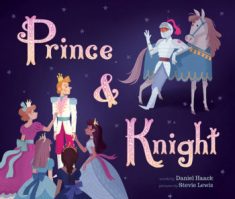 West Virginia’s Upshur County public library has pulled a book from its shelves this week, after a local church minister publicly raised concerns over its content.

Prince & Knight written by Daniel Haack and illustrated by Stevie Lewis is published by Little Bee Books, in partnership with GLAAD, a media monitoring organization calling for LGBTQ acceptance. The book is described as a “modern fairy tale” in which “a noble prince and a brave knight come together to defeat a terrible monster and in the process find true love in a most unexpected place.” At the end of the book, with the King and Queen “overwhelmed with joy” that their son has found someone perfect, the two get married.

Josh Layfield, the pastor of Calvary Chapel Mountain Highlands, took to Facebook to share his outrage over the story, his interference resulting in the book being pulled from the library:

“I met with the Library director and informed him of my concerns. He has removed it from the shelves waiting to meet with the board for the final decision…

“As a father of four boys I know my boys love princes, kings, and rulers. They love knights in shining armor and they emulate these men by acting them out in play. This book is a deliberate attempt to indoctrinate young children, especially boys, into the LGBTQA lifestyle…

“Unfortunately this is an intentional leading of children into sin and parents and citizens within this community must be mindful with what is happening.”

While some on Facebook have agreed with his sentiments, thanking him for his actions, many have expressed their outrage and disappointment. Illustrator Lewis deftly replied to Layfield saying:

“While I am not a religious person, Christianity, to me, is a religion that is welcoming, loving and kind to those who seek to learn more about God. I would hope that members of the LGBTQ community can one day walk into the Calvary Chapel and feel accepted no matter what their sexuality is, and practice worshiping together.”

Public libraries are shared community institutions intended to serve the information needs of everyone who resides in the community. In particular, the public library has a responsibility to represent a broad range of materials in its collection and to meet the needs of everyone in the community it serves—not just the most vocal, the most powerful, or even the majority. Individual library users have the right to voice their concerns about a library book and select different materials for themselves and their own families, but those objecting to particular books should not be given the power to restrict other users’ right to access those books.

“The decision to remove Prince & Knight from the shelves of the Upshur County Public Library is an act of discrimination, plain and simple… Inclusive children’s books do not ‘indoctrinate’ but do allow LGBTQ families and their children the chance to see themselves reflected in the world.”

In response to the support, Haack said in a statement to GLAAD:

“Prince & Knight is meant to be a fun little adventure story that also just happens to better reflect the reality of millions of families not seen in other children’s stories. If the protesters are worried that reading this book will turn someone gay, I can easily refer them to all the gay adults who grew up only reading about straight romances.”

An online petition against the book ban has been circulating on change.org, led by local LGBTQ organization Buckhannon Pride and GLAAD, collecting 740 signatures to date, expressing:

“Treating LGBTQ+ books as dangerous reading material will only create more division in our community. The book was written for children to show acceptance and love, and it is important that children have access to these types of stories that’s been proven to reduce bullying, hate crimes, and suicide amongst LGBTQ+ youth.”

By now, the review meeting should have happened. What will the library have finally decided: Is acceptance or discrimination the way forward in Upshur County?