Let it be a book, rising from the ashes

Back in 2015, Julia Fleischaker and Kirsten Reach wrote about the bombing of Mosul Public Library in Iraq. It was once a centre of knowledge and a symbol of cultural enlightenment, housing a collection of rare, Unesco-registered books. When ISIS occupied the city in 2014, so began a campaign of “cleansing” that saw the building gutted, with over 100,000 books and manuscripts destroyed. Since then, other, smaller libraries across the city have suffered from looting and destruction.

But a glimmer of hope survives. A campaign is under way to restore the library and others in the city. It is being spearheaded by the anonymous Moslawi historian who writes the Mosul Eye blog about life in a city under ISIS occupation. For safety his identity has to be kept anonymous.

Speaking exclusively to Chloe Farand at the Independent, he expressed his distress at watching his city and the library fall:

“Manuscripts that document the most important and critical phase of the history of modern Mosul may not be ever recovered. There will always be a black hole in the history of Mosul and Iraq as a result.

“The university’s central library was my second home. It used to house a wealth of rare publications and unique manuscripts that were available nowhere else.”

Launched this February, the campaign uses the slogan “Let it be a book, rising from the ashes.” Collection centres in Europe and the US hold thousands of contributions. But logistics are not easy and simply getting books into the city is proving problematic. For now, they are being collected in the Iraqi city of Irbil — presently there are about 400 there. Mosul Eye was forced to use social media earlier this month to plead with Basra port authorities to allow a 200-tonne shipment from Irbil into Mosul.

For our historian, this is only the beginning. He hopes to collect 200,000 books to rebuild not only the library of the University of Mosul, but others across the city that have been targeted as well. He has disseminated his message on the blog:

ISIL devastated Mosul’s libraries, among the devastation it inflicted on the city, wrecking those libraries by stealing, destroying and burning those treasures, under different excuses. Once as “useless science”, another as “Illegitimate science”, and last but not least, “blasphemous books”!

And because rebuilding the libraries and filling them back with books is one of the most significant forms of rebuilding Mosul civilly, we launch this international campaign to collect books and all types of printed products (magazines, periodicals, newspapers, references, archives, and the like) in all disciplines of Knowledge and Science, and IN ALL LANGUAGES. ALL LANGUAGES AND DISCIPLINES ARE WELCOME. 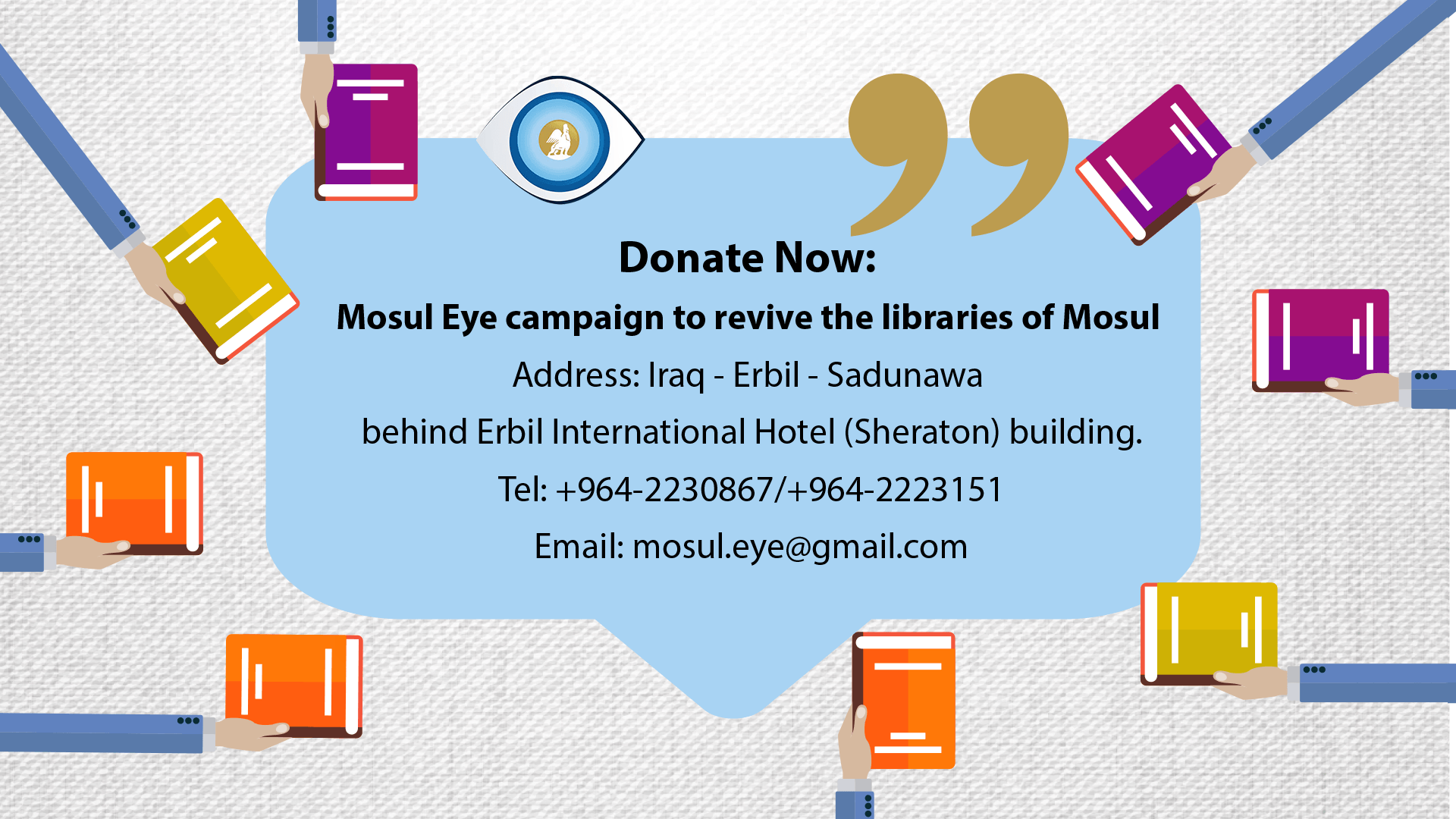 One NGO in Marseille, Entraide et Coopération en Méditerranée, has responded with enthusiasm and pledged twenty tonnes’ worth of books to the cause. The founder of the organization, Mohamed Hermi, told Farand:

“The only thing that can cure the evils of society are books and learning. Books are the weapon to fight against all cancers of society.

“In order to fight against intolerance, racism, anti-semitism, extremism and radicalism, society has to read, read and read.

“We work with lots of organisations and schools in the area and we have loads of books, that’s no problem. Working out how to transport the books through Iraq is more difficult.”

Sadly, the response from other Arab countries has been negligible. The historian told Neveen Youssef at the BBC, “So far, we received only one single donation from an Iraqi lady living in Jordan, and frankly, her donation was the first donation we received since we launched the campaign.”

Meanwhile, clashes between Iraqi forces and ISIS fighters continue to ravage Mosul, with over 40,000 people displaced from the city only last week. This book campaign may be a small act of resilience unnable to stop the continuing devastation, but it can perhaps give some hope, and start to rebuild something for future generations.