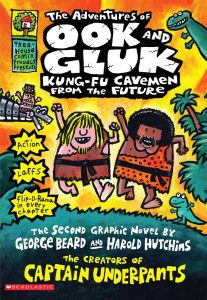 Selling over 80 million copies worldwide and with a DreamWorks film to its name, the Captain Underpants series by Dav Pilkey is a much loved and lauded series of children’s books. But it has recently come under scrutiny with publisher Scholastic taking the decision to stop distributing the spin-off book The Adventures of Ook and Gluk: Kung-Fu Cavemen from the Future, admitting it perpetuates passive racism.

The book, originally published in 2010, follows a pair of cavemen friends who travel from 500,001 BC to AD 2222, where they they learn kung fu from martial arts instructor Master Wong. A Korean-American father of two young children, Billy Kim, got in touch with Scholastic after being shocked by its content. Raising a petition on Change.org to get the book removed from sale, he states:

“Upon close inspection, I realized the book relied upon multiple instances of racist imagery and stereotypical tropes, including a “Kung Fu master” wearing what’s purported to be a traditional-style Tang coat, dashes for eyes for the Asian characters, stereotypical Chinese proverbs, and a storyline that has the Kung Fu master rescued by the non-Asian protagonists using their Kung Fu skills (despite the fact that they were taught said skills from the supposed master)…

“…It is this type of passive racism that has contributed to the continued hate and prejudice experienced by Asian Americans on a daily basis.”

This comes amidst a disturbing, rising wave of  hate crimes against Asian-Americans since the COVID pandemic, including massacres at three Atlanta spas, where eight people died, six of them Asian women. The latest report from Stop AAPI Hate, a nonprofit social organization standing against anti-Asian hate crimes, revealed 3,795 incidents were reported to them in the last year, ranging from verbal harassment and online bullying to physical assault. And this is just the tip of the iceberg, most crimes going unreported.

Scholastic released a statement last week making a public apology, backed by Pilkey, announcing the immediate withdrawal of The Adventures of Ook and Gluk:

“we recognize that this book perpetuates passive racism. We are deeply sorry for this serious mistake. Scholastic has removed the book from our websites, stopped fulfillment of any orders (domestically or abroad), contacted our retail partners to explain why this book is no longer available, and sought a return of all inventory. We will take steps to inform schools and libraries who may still have this title in circulation of our decision to withdraw it from publication.”

The move was supported by Pilkey, who himself shared a letter of apology on Youtube, which read:

“..this week it was brought to my attention that this book also contains harmful racial stereotypes and passively racist imagery. I wanted to take this opportunity to publicly apologise for this. It was and is wrong and harmful to my Asian readers, friends, and family, and to all Asian people.

“…I hope that you, my readers, will forgive me, and learn from my mistake that even unintentional and passive stereotypes and racism are harmful to everyone. I apologise, and I pledge to do better.”

He went on to say all money he made from the book will be donated to nonprofits including We Need Diverse Books, The AAPI and TheaterWorks USA.

This is not the first instance of a high profile author facing a reckoning for past works that include harmful racist depictions. Only a few weeks ago, Dr. Seuss Enterprises put out a statement saying six Dr Seuss books would be removed from sale due to them portraying ‘people in ways that are hurtful and wrong.’

Removing books containing racist imagery and content which have already been out in the word for years, causing damage, is a just a small step to addressing much wider issues to ensure all children can see themselves in the books they read.

The banned books of 2012: toilets and bondage