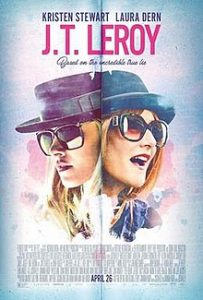 Let us toast the literary scandals of days gone by.

In the late 90s and early aughts the writer Laura Albert conceived of the literary persona (which is like a pen name on speed) of JT LeRoy. The gritty and personal writing of the (fake) teenage boy protagonist-author in Alberts books spoke to readers—figuratively. The problem was that Albert herself wasn’t out there on the road speaking to readers—literally.

Instead, Albert had her sister-in-law Savannah Knoop don the LeRoy personality and hit the media circuit.

In 2006, a New York Times story by Warren St. John revealed Savannah’s identity. Since then Savannah has released the memoir Girl Boy Girl: How I Became JT Leroy and two documentaries have followed.

Now, thanks to Michael Nordine at Indiewire, we see that the bizarre literary triangle is getting the major motion picture treatment in the form of writer and director Justin Kelly’s  J.T. Leroy. The film stars Kristen Stewart as Savannah, and Laura Dern as Albert. There is also a performance by, thank god, Courtney Love.

Check out the trailer below, and see it in theaters starting April 26th.

How not to run a newspaper