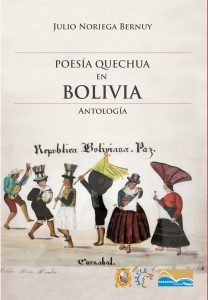 Last December, we reported that the Peruvian television station TV Peru was launching its first-ever program in Quechua, “the most widely spoken autochthonous language in Peru, with millions of speakers also in Argentina, Bolivia, Brazil, Chile, Colombia, and Ecuador,” a decision that would help to preserve the dying language, which enjoyed great prestige as the official language of the Inca Empire from the thirteenth through sixteenth centuries, but has been in decline since it was banned by colonial European powers in the eighteenth century.

Now, after twenty-odd years of research, Knox College professor Julio Noriega is preparing to release another Quechua first: a collection of the language’s poetry entitled Poesía Quechua en Bolivia (“Quechua Poetry in Bolivia”). The book, which was recently published in Peru, arrives in bookshops and libraries in a bilingual edition that presents the poems in both the original Quechua and Spanish translation. As Remezcla’s Adriana Cataño reports, “Noriega also included a section on how each of these poems has evolved throughout the years and how many versions of it exist.”

Just as it’s rare to hear Quechua spoken on television, it’s not everyday that Peruvians see this language, spoken by around eight million people, printed in a bound book. Noriega was inspired to create the anthology after he began collecting books published in the language, which are rare primarily because “there is not an education in the Quechua language itself.” Noriega thinks of Poesía Quechua en Bolivia, then, as miniature version of his personal Quechua library. He hopes will prove useful for scholars and researchers, and that it will remain available to anyone interested for years to come.