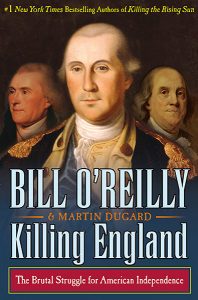 As we reported earlier this year, Bill O’Reilly—serial sexual harasser and the guy who called Sunday’s massacre in Las Vegas “the price of freedom”—isn’t selling quite as many books as he used to. That appears to be remaining true in the two weeks that have elapsed since the release of O’Reilly’s latest, Killing England.

As Publishers Weekly’s Jim Milliot reports, O’Reilly’s chronicle of the American Revolution (the sixth installment in his “killing” series co-written wih Martin Dugard) did not match his previous books in first-week sales — not by a long shot. O’Reilly’s last book, Killing the Rising Sun, released in September 2016 (eight months before he was fired), sold 144,000 units in its first week. Killing Reagan (2015) and Killing Patton (2014) also rolled out with sales in the six figures: 112,000 copies and 165,000 copies respectively.

So how’d Killing England do? Released on September 19th, O’Reilly’s latest reportedly sold 65,000 units during pub week, a more-than-fifty-percent decrease in sales (more like 55%) compared to Rising Sun. Unfortunately, those sales numbers still aren’t dismal, and they still earned a position on the New York Times Bes Sellers list, where the book debuted at number two. He’s led by Hillary Clinton’s What Happened and trailed by Katy Tur’s Unbelievable and Gucci Mane’s autobiography.

It was never looking great for O’Reilly, this time around. As Alexandra Alter reported in the New York Times, by the day before book’s release, it had become clear that sales were taking a plunge:

[T]he title had barely cracked Amazon’s print best-seller list, with a ranking of 90 — a sign that preorders were low. (By comparison, the latest entry in the “Diary of a Wimpy Kid” series, which won’t be released until November, is already No. 15.)

The e-book version of “Killing England” was even more obscure, appearing at No. 864 on Amazon’s Kindle best-seller list. With lackluster Amazon rankings, Mr. O’Reilly’s latest release seems unlikely to gain enough momentum in its first week on sale to become an instant No. 1 best-seller like his earlier works.

This decline can be attributed to Bill O’Reilly’s heinous behavior, but only in part. While we should never forget that it was his actions that eventually forced Fox to show him the door, it’s probably naive to think that’s the sole reason sales are down. As we wrote then:

With the cancellation of [his television platform], O’Reilly has lost his primary book-buying audience, as well as his the support of the network (which is pretty demanding of its authors). That loss of core audience is huge, especially given the reasons for O’Reilly’s firing. It’s hard to imagine anyone but O’Reilly Army-types, those constantly sucking at the funnel of O’Reilly anger, still actively seeking out garbage books like Old School: Life in the Sane Lane, Killing the Rising Sun: How American Vanquished World War II Japan, and Pinheads and Patriots: Where You Stand in the Age of America — books that, had they been written by anyone else, would line the bottoms of publishers’ slush piles, not the tops of industry bestseller lists.

It’s likely, too, that given O’Reilly’s egregious transgressions, book retailers (bookstores and the wholesalers they buy from) are purchasing fewer copies of his titles. Fewer bookstores taking on fewer copies would in turn mean fewer store face-outs, shorter stacks, and less shelf real estate. Additionally, many are the bookstores that have always had ideological issues with O’Reilly, but still stocked his books to meet customer demand (hello, indie bookstores!); they can now be forgiven for opting out entirely. This makes for a bigger hassle for those who still wish to support him. All that spells lost sales.