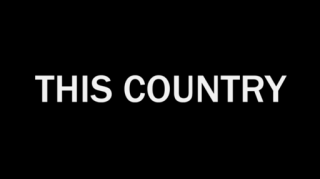 This week we received the heartening news that This Country—one of the most successful BBC comedies of recent times—is to receive a welcome book adaptation. The spoof documentary, which was confirmed for a third series last year, focuses on brother and sister Kerry and Kurtan Mucklowe—played by real-life siblings Daisy May and Charlie Cooper—and their adventures in an unnamed, fictional Westcountry village*.

The pair’s intense local rivalries, attempts to find gainful employment, and most importantly, their entries into the village scarecrow competition, are chronicled in frequently hilarious detail. “The whole show is pretty much our experience of growing up in the Cotswolds,” Charlie explained in an interview with Alice Jones in The Independent in 2017. “It’s how the characters make the smallest things into huge things.”

It’s a format that has brought the duo huge critical acclaim (the Guardian called series two “comic perfection”) and a string of television awards, including three BAFTAs. The Coopers, who moved back to their parents’ home after giving up on stage school, are now reaping the rewards for their perseverance—and for their seemingly endless supply of anecdotes about their early days (seriously, try and get through this clip of Daisy speaking with comedian Romesh Ranganathan about accidentally auditioning to be a stripper without crying with laughter. I’ll wait.)

Remember kids, “£500+ a week exotic dancing” does not mean fruit on your head. 🤣 @charliecooper11 @RomeshRanga pic.twitter.com/yxsEQ9B5DC

The Bookseller reported on Wednesday that a This Country tie-in, titled This is This Country, was acquired by Trapeze in a six-way auction:

Promising to reveal “the real sh*t that goes down in Kerry and Kurtan’s village” … This is This Country sees main characters Kerry and Kurtan Mucklowe guest edit the local parish newsletter. It will feature “Kerry’s Village Tw*t List,” the vicar’s poetry, the Laurence Llewellyn-Bowen files, Mandy’s correspondence to her adopted dog Digby and Kerry’s Neighbourhood Watch diary.

Kerry and Kurtan simultaneously announced a Twitter handle, @KerryAndKurtan, where fans can find out more about the book, due for release in October. We’ll leave the typically gracious final words to them (also from the Bookseller article):

“After finishing our first book we’d like to take a moment to thank Windows spell check and a big ‘f*** you’ to our old English teacher Mrs Fletcher. No, we don’t need to know how to spell to write a book, you coffee breathed dragon. Cheers, Kerry and Kurtan.”

*presumably the village is near Swindon: Kerry frequently appears in a Swindon Town FC shirt, and even adapted the strip for an award ceremony dress in 2018.