“Hi! I’ll be right here, practicing saying ‘about,’ if you need me.”

It’s been pretty well established by now that Donald Trump doesn’t like to read. Thanks to an online forum, we can now chalk this up as just one more way that Canada is superior. Prime Minister Justin Trudeau took to Quora to answer the question, “What are your five favorite books?” 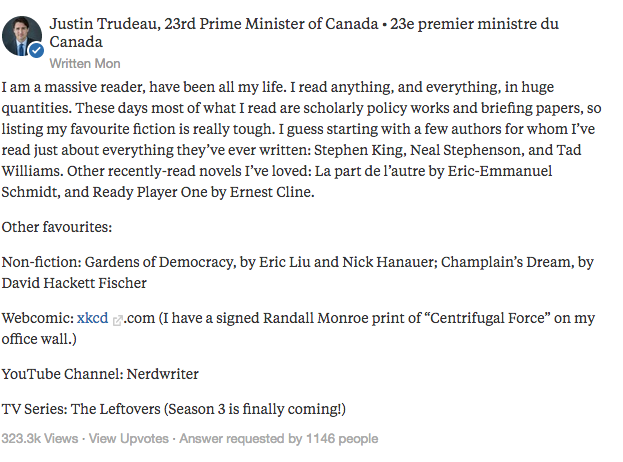 xkcd! The Leftovers! Nerdwriter! (?) Anyway, back to books. Publisher Penguin Random House writes about Gardens of Democracy that “Liu and Hanauer’s ideas are simple but revolutionary: true ‘self-interest’ is incomplete without tending to the shared best interests of the national community.” Sigh.

Oh, but is this Trudeau guy ever a nerd. Admits he has little time to read for fun and adventure anymore because he’s always keeping up on policy, but look at those favorites: Nerdstuff through and through. You’ve got your Stephen King of course, and your Neal Stephenson, the master of erudite cyberpunk who gave us Snow Crash (the main character is a guy named Hiro Protagonist), and your Tad Williams, who goes more toward the sword-n-sorcery stuff. The two novels Trudeau names are also science fictional — Ready Player One is a dystopian SF story about adventures in virtual reality, which is a far preferable place than the dying overheated Earth of 2044 that Donald Trump is helping to build right now. And La Part de l’autre is a 2001 alternate-history affair (never published in English as far as we can tell) about the life of a young man named Adolf H. who in 1908 gets accepted to the Vienna School of Fine Arts, becomes a painter, and never bothers with politics. But he does meet a nice doctor named Freud who helps him work through some issues.