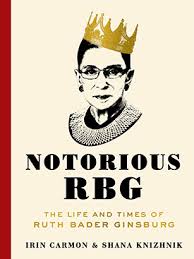 In an onstage interview last Thursday at George Washington University, Justice Ruth Bader Ginsburg addressed some of the tough questions that have been on all of our minds. Stuff like, “Can you please please please stick it out through the Trump years?” To which the eighty-three-year-old vowed, “I will do this job as long as I can do it full steam.”

To the question of what makes America great, she responded that it’s both free speech and  “the words written on the Statue of Liberty, the idea of our nation being receptive to all people, welcoming of all people.”

As for what we should think about our current political moment, she invoked the Women’s March on Washington, saying, “So, yes, we are not experiencing the best times, but there is reason to hope that we will see a better day.”

And when it came to whether she’s uncomfortable being linked with a name like Notorious BIG… Well, OK, this might need some more explanation.

You likely have already seen the very popular blog-turned-book The Notorious RBG. But if you haven’t, it’s a series of memes that celebrate the justice for her left-wing cred as much as her public persona cred. (If you don’t know, now you know.)

So when asked if she was indeed uncomfortable with a connection to the legendary rapper, Ginsburg responded in true Notorious fashion, saying, “Why should I feel uncomfortable? We have a lot in common.” (To uproarious applause.) She says that the similarities begin with the fact that they were both born and raised in Brooklyn, NY. She goes on to hint at a spiritual connection based in the fact that the blog was founded on her dissenting opinion in Shelby County v. Holder, the controversial 2013 case in which the Supreme Court struck down what had been a key provision of the Voting Rights Act of 1965.

Further notes from the Women’s March on Washington