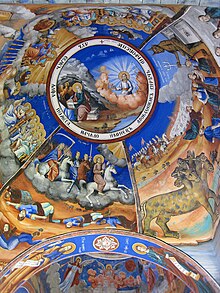 If you grew up in the surburban south, this probably won’t shock you, but some presumptuous yahoo from Wisconsin is sending people unsolicited reading material about the Biblical end times. Not that it’s an inappropriate moment. Every day it becomes clearer that our commander-in-chief is the brain-dead Antichrist. In which case it’s probably a good idea to do a little preliminary research. You know, for context.

That’s where Dwight Hall comes in. As founder and CEO of Remnant Publications, he’s been sending out “free” copies of The Great Controversy by Ellen G. White for years. White is a founder and prophetess (?) of the Seventh-day Adventist Church, and her book, according to Hall, “starts at the fall of Jerusalem in 70 A.D. and then it goes through the Reformation, to the Dark Ages, then it goes into how America was formed, then the end is more prophecy of the last chapter of Revelations and the Bible and maybe how it could possibly end.” Sounds like a useful document, no?

White, who died in 1915, certainly thought so. And so does Dwight Hall, who frequently blankets entire zip codes with batches of the cheap paperback. According to Hall, these mailings are responses to members of the target communities who see the distribution of the book as a kind of missionary work. Some of these mailings cost in excess of a million dollars, which sounds like a pretty major scam to me, but what do I know, I’m a heathen.

Hall, for his part, doesn’t exactly sound like he’s got the fire in him. As he puts it, customers “give up their own money and then they donate so much and then it coming by mail, through zip code mailing, so nobody knows if somebody’s a Christian or not a Christian, or whatever… I think their purpose is just to inform people to how they can maybe have a better life.”

Wow. This guy is really full to burstin’ with the spirit of the Lord.

If you’re interested in spreading the good word, you can buy “6480 for $0.61 each and save 94%” according to the Remnant website. That’s less than 4,000 dollars total, not counting shipping! WHAT A DEAL! GET IT NOW BEFORE THE END OF EVERYTHING!

Another year, another attempt to make the Bible Mississippi's state book