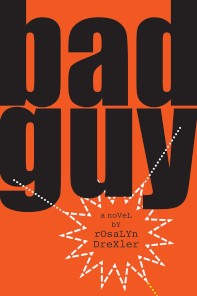 Independent publishing is a business with few celebrities. You wouldn’t call it a glamorous industry. Which is why it’s all the more noteworthy when two genuine superstars join forces on a project of genuine interest. Such is the case with Jonathan Lethem—ahem—and Bill Henderson‘s newly announced line of reprints, Lethem’s Legends.

As reported by Jim Milliot in Publishers’s Weekly, Lethem (author of a whole bunch of cool books, including More Alive and Less Lonely, published with yours truly, and The Feral Detective) and Henderson (a true O.G. who founded Pushcart Press in 1972, and in 1976 established the Pushcart Prize) have been cooking up this collaboration for some time now, and will inaugurate the series this week with the publication of Bad Guy by painter and visual artist Rosalyn Drexler. The noir-sounding novel “probes the influence of media violence on a young murderer and the wacky attempts of therapist Dr. Mathilda Brody to understand and cure him.” The release coincides with a month long retrospective, Rosalyn Drexler: The Greatest Show on Earth, which opens February 21st at the Garth Greenan Gallery.

As Henderson tells it, Bad Guy is just the first of several of potential titles that Lethem originally proposed, and—if all goes well—they’ll be putting out one or two a year. As you can read in More Alive and Less Lonely, Lethem is a reader’s writer, and has always worn his influences on his sleeve, as it were. It should be great fun to see some of his personal lodestars returned to life, and we can think of no better partner than Henderson, whose dedication to independent publishing is an inspiration to so many in the business. Congratulations! and best of luck to the both of ‘ya.