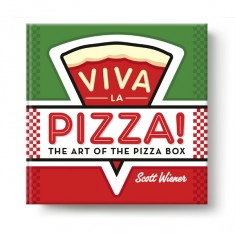 Pizza is having kind of a moment — in recent months, we’ve seen Pizza Rat grow from a fledgeling meme to a bona fide cultural phenomenon, watched in horror as the “Fyre Festival of Pizza” gave this planet’s most revered snack the snake-oil treatment, witnessed its transformation into a tool of political protest, and even gotten to hear Ryan Gosling utter the immortal words “Chef Luigi Marinara.”

And now Scott Wiener, author of Viva la Pizza! and New York’s OG Pizza Tourguide (Pizzadventurer? Cheesey Rider? Pepperoneironaut?), is emerging as an ever-more-prominent advocate for humanitarianism with a well-sauced face. In 2009, Scott founded Slice Out Hunger, a non-profit that “creates pizza-related events and campaigns to support American hunger relief and prevention initiatives.”

Over the past eight years, they’ve raised nearly $200,000 to help America’s undernourished, and they’re working now to spread their rich, yeasty dough—and urgent hunger relief work—across the country. Just last month, in the wake of Hurricane Harvey, fifteen pizzerias—from Chesapeake, Virginia to Ukiah, California—participated in their Toppings for Texas campaign by offering special Texas-themed pies, and contibuting a dollar to the Houston Food Bank for each one sold.

But New Yorkers can be forgiven for regarding ourselves as the world’s ultimate arbiters of all things pizza (duh, we are), so it’s especially exciting that tomorrow will bring this year’s annual $1 Slice Night, a magical evening during which more than sixty local ’za-ologists will offer one-dollar slices to all comers, with the proceeds being split evenly between the Sylvia Center and City Harvest. Among the participants are bona fide legends like Di Fara and Grimaldi’s, pomo(doro)-inflected past masters like Lucali and Fornino, and the lovable, radically flavor-inclusive hippies of Two Boots. (Vegan and gluten-free options will be available, too — bring your friends.)

We reached out to Scott, a guy whose boundless energy seems a testament to the nutritional payload of the Almighty Slice, even as his great affability seems proof of its salutary impact on human moods. “The best part of running a business is being able to give back to the community like this!” he told us.

Asked what he likes best about his fundraising work, Scott says, “Slice Out Hunger pulls together everything I love about pizza. It brings people together in a way that only PIZZA can. This event in particular brings together the pizza makers, pizzeria owners, and the pizza eaters. It’s a big love fest.”

As for how this year’s event is looking, Scott says, “We have more pizzerias and more pizza lined up than ever before. 65 pizzerias serving 1,600+ pizzas. It’s going to be massive. We actually had to pull the $100 VIP passes off our website because we were starting to sell too many. We want to make sure people who wait patiently to get inside can still get into the event.”

If you’re anywhere within dough-tossing distance of New York City, you should most definitely shake it on over to Dollar Slice Night tomorrow — the festivities kick off at 6pm at Saint Anthony’s Church, 155 Sullivan Street. It’s going to be a party. As Scott puts it, “Pizza is the perfect communal food. Everybody loves it. What better way to encourage community?”

What kind of garbage should we sell you directly through Twitter?