Joanne Kyger and Gary Snyder, photographed by Allen Ginsberg in 1963 while looking cute in Kyoto. Via Pinterest.

The world yesterday woke up gray with the news of Joanne Kyger’s death. A major American poet whose career spanned sixty years, Kyger was beloved by many as a mentor and lynchpin of the big, radiant poetry community of Bolinas, California. She was eighty-two.

Kyger first emerged in American poetry in the late fifties, when she became associated with the San Francisco Renaissance, a loose grouping of postmodern poets that included the likes of Robert Duncan and Jack Spicer. In 1960, she traveled to Japan, where she met fellow writer Gary Snyder; the two soon married, and together pursued a shared interest in Zen Buddhism for several years. In 1964, the couple traveled with Allen Ginsberg and his lover Peter Orlovsky to India, where they continued their studies and met with the Dalai Lama (then a spry lad nearing thirty). In 1965, Kyger and Snyder divorced, and she married Jack Boyce (the two would later divorce). That same year, she published her first book, The Tapestry and the Web. Kyger in 2003. Via WikiMedia Commons.

In 1968, Kyger moved to Bolinas, about thirteen miles from San Francisco as the crow flies, and there played a central role in creating one of the most improbable and enduring deliberate communities in America. Over the next few years, poets began arriving in droves, including Alice Notley, Ted Berrigan, Gerard Malanga, Anne Waldman, Aram Saroyan, Robert Creeley, Joe Brainard, and Lewis Warsh. The scene began to dissipate in the early eighties, but Kyger never left Bolinas, a base from which she continued to exert influence and encourage younger writers for the rest of her life.

Her poetry is not easily characterized; it has affinities with the Buddhist-tinged intuitions of Beat writing, the socially resonant talkiness of the New York School, the formalism and scholarliness of Language poetry, the indebtedness to Charles Olson that characterizes the Black Mountain school, and much else. She was especially close to the poet Lew Welch (who was, incidentally, Huey Lewis’s stepfather). Anne Waldman wrote of her work, “Her politics are environmental. She locates the world in tangibles.” Alice Notley once marked Kyger’s influence on her by calling her “one of the women who’s shown me how to speak as myself, to be intelligent in the way I wish and am, rather than suiting the requirements of established intellectuality.” In an obituary, San Francisco Chronicle books editor John McMurtrie quotes critic John Freeman as observing “these poems are best read silently, then aloud,” which perhaps speaks to the sweeping field of linguistic activity her work undertakes.

Of her own place among literary movements, Kyger wrote in the late nineties:

I would not want to characterize the subject matter of Kyger’s writing, but I think it’s fair to say it’s informed by the importance of small things, and that it looks, with a kind of urgent quietness, to the ways we live with one another, the worlds we make in how we talk and listen, look and make ourselves visible. In one poem, she writes: 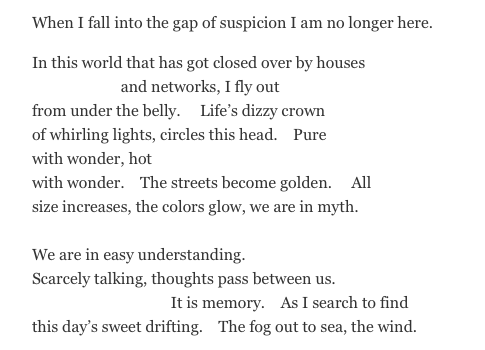 The landscapes of northern California are a frequent backdrop to her work, and she sometimes pointedly contrasts the bluster and tension of social relationships with a more contemplative view of the human world as an aspect of nature. In a poem from her 1991 Black Sparrow collection Just Space, she writes:

Kyger wrote more than twenty books; her latest, a collection of letters and other ephemera edited by Cedar Sigo and called There You Are, is due out from Wave Books this September. Her departure is a huge loss, and leaves a hole in the world of American poetry that no one seems apt to fill.

May the awakening be peaceful, and thank you, Joanne Kyger, for all you gave us.