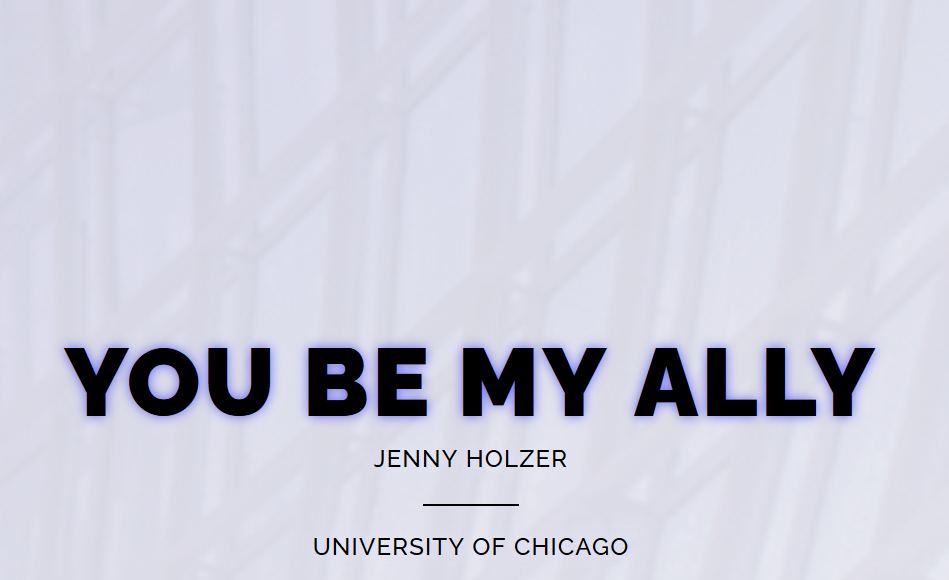 Famed postmodernist artist Jenny Holzer is releasing a mobile app on Monday that will allow quotes from selected Great Books to be projected, Holzer-style, onto nearby surfaces.

The project—or whatever one might call it—is called “You Be My Ally” and is being produced in conjunction with the University of Chicago, where Holzer studied during a formative period in the 1970s.

Holzer made her name during that decade with a series of brief, aphoristic texts that were pasted or projected onto the surfaces of public buildings or displayed on an LED-powered crawl. In the words of scholar Margaret Barlow, these texts “used language and the mechanics of late 20th-century communications as an assault on established notions of where art should be shown.”

In this spirit, Holzer’s app could be seen as an extension of her oeuvre, since a smartphone app is perhaps the most contemporary mechanism for text-making of them all.

The authors Holzer’s app cites include Frantz Fanon, Mary Shelley, W.E.B. duBois, and Toni Morrison; according to the New York Times, they were intended “to touch on weighty, also timely, issues like justice, truth, and violence.”

According to the Times, when the app goes fully live, the feature will allow countless Holzers manqués to project the messages “wherever they want,” adding solemnly that the mechanism runs on “augmented reality technology” (you just cannot throw one past the Times). We’re not big “app” guys over here at virtual John Street — well some of us aren’t — but we must admit to an occasional yearning for some kind of return to reality, augmented or no.

In the meantime, if Holzer or someone at the U. of C. wants some fresh quotes—especially of a politically provocative nature—hit us up! We’ve got loads!