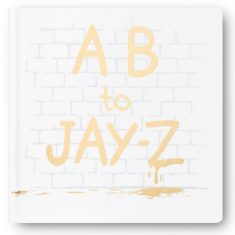 “If you’re having alphabet problems I feel bad for you son, I got 99 problems but my ABCs ain’t one.”

So reads the quote on the back of children’s book AB to Jay-Z, written by Danny Chiha and Jessica Chiha and published by Little Homie, a quote doctored from a lyric taken from Jay-Z’s seminal track ’99 Problems’… without permission. Now Jay-Z, one of the wealthiest musicians in the world with a net worth of $1 billion, is taking action.

The brand Little Homie is owned by Australian Jessica Chiha, selling books and clothing for children themed around hip-hop. She explains her reasonings for starting the company on her website, saying:

Whilst pregnant, the thought of becoming a parent frightened me a hell of a lot. I didn’t want to leave the life I knew behind me, and lose myself in the process. This was the catalyst I needed to create something that I could better connect with my daughter with, by combining my new family with my love of hip-hop.

This is how it all began, I am a first-time mum and I understand the struggle. The brand is something that I have wanted to build for years. I am obsessed with hip-hop. Whenever our friends and family had a child, I found I wanted to give them something that reflected me whilst being a gift I knew they would be just as excited about as I was. I wanted to create something that set itself apart from the usual pink and blue explosion that you find at your local baby store.

AB to Jay-Z started out as a Kickstarter project in 2017, raising over $8,000 AUD. Since learning of its publication in 2017, which uses Jay-Z’s likeness and lyrics in and on the book, Little Homie have received several cease-and-desist letters from the rap star’s representation, and finally a lawsuit was filed this September, alleging Chiha and Little Homie deliberately and knowingly attempted to trade off the reputation of the rapper.

In a statement last week, Chiha said, as reported by Perth Now:

“We maintain we have done nothing wrong and intend to give it everything we’ve got for common sense and common good to prevail, to the extent we can fight the fight.”

The question is, have they done nothing wrong? Fans they may be, but fans using lyrics and likeness without permission.

Not only this, but controversy has surrounded the company since 2017. Chiha (self nick-named “J-Pain”) has been called out online for cultural appropriation and racism, an online backlash starting when Erica Dinero, aka @sweetfacedinero messaged the company on Twitter asking if they were black owned. They are not, the reply coming back “does it matter?” You decide how comfortable you are now with Little Homie using words promotionally like “nigga” or “OG.”

Dinero then went on to share photos of Chiha’s husband at a party … in full blackface.

Here is the authors husband and their friends. This is why we need to take all measures to protect our culture. This shit RIGHT HERE pic.twitter.com/CnRYKrvJwk

Unsurprisingly, a lot of people got pretty angry, pretty quickly. Michael Harriot wrote for The Root back in 2017:

“It is more amusing than it is infuriating because we have seen this too many times. Either they don’t know what culture is or they don’t have one of their own, so—as they did the land of the First Nation and the bodies of Africans—they just took it.”

An online petition was even started to remove books from shelves and halt sales, organiser Barbara Verneus writing:

“I don’t know about you but I’m not okay with these N-word using, Blackface wearing, Culture Appropriating folks teaching my child about Hip Hop or anything else, for that matter.”

“The whole Australian narrative around Jay-Z just being a vindictive rich man out to get some poor innocent family needs to stop—he’s a Black man trying to protect his likenesses from racist white people that have no respect for Black people or their culture. I hope his case tears them to shreds.”

This is going to be a messy battle that can only get messier, which Chiha seems determined not to step down from. For now, AB to Jay-Z remains on sale.