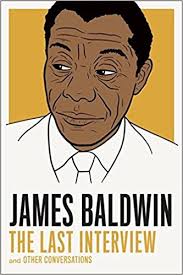 In a universe not far from this one, James Baldwin could have been the Person of the Year (though no complainin’ about this).

In 2017, he was the subject of a much-praised documentary, had everybody reading Giovanni’s Room on the subway, and, of course, remained a popular participant in the Melville House Last Interview Series. All of this had folks wondering if Baldwin had spied 2017 through a crystal ball, or at least realizing how much he’d seen through through the prevailing power structures of sixties and seventies America, while too many of his contemporaries saw only surface.

His eminence will continue on into 2018, when, in August, Duke University Press will reissue Little Man, Little Man, the only children’s book Baldwin ever wrote. It was originally published by Dial Press in 1976, to a quiet reception.

As Sally Lodge writes for Publishers Weekly, the reissue will feature

the original illustrations by the Parisian artist Yoran Cazac; an introduction by the edition’s coeditors, Baldwin scholars Nicholas Boggs and Jennifer DeVere Brody; a foreword by Baldwin’s nephew, Tejan “TJ” Karefa; and an afterword by Aisha Karefa-Smart, the author’s niece and Karefa’s older sister.

It is fitting that Baldwin’s nephew and niece, children of his sister Gloria, contributed to the new edition of Little Man, Little Man, since their childhood on Manhattan’s Upper West Side inspired the book. 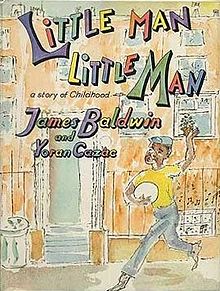 Baldwin himself described the resulting book as “a celebration of the self-esteem of black children.”

One reason the original run didn’t make a big splash, according to the reissue’s biggest champion, NYU Professor and editor Nicholas Boggs, could be that “the book is written in black English, which Baldwin celebrated, both as an art form and as a form of politics,” and thus ahead of its time. “In an era of Black Lives Matter, readers are ready to think about how children inevitably confront challenging social issues,” Boggs adds.

Either way, Little Man, Little Man seems to be yet another example of Baldwin’s uncanny access to the future — this time looking ahead to an era where children’s literature would be seen as a site of meaningful social and political change, and when “We need diverse kids’ books” would be a rallying cry for readers and publishers alike.