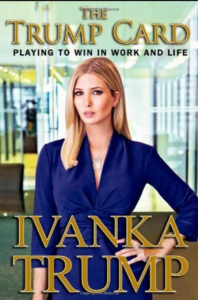 “In business, as in life, nothing is ever handed to you.”  says Ivanka Trump. Vicky Ward, perhaps, will hand it to them.

High finance and million-dollar real estate: they go together like Ivanka Trump and Jared Kushner. They’re also the two beats of investigative journalist Vicky Ward, who plans to write a book about the problematic power couple.

There’s reason to think the couple won’t exactly be lining up for signed copies — the title is “Kushner, Inc.,” Ward tells us, an apparent reference to her previous criticism of the powerful pair. Ward, who has written for Esquire, Vanity Fair and HuffPost, has said the Kushner-Trumps have used their White House positions to enrich themselves. “The White House is turning into the Kushner piggy bank,” she said in an interview last year. And on Ivanka: “What is she doing policy-wise? Nothing. But what she is doing is wearing clothes. She’s in a business that sells clothes, shoes. That’s what she does.”

The book, slated for a 2019 publication, is going to require some savvy reporting, as the Kushner family has not cooperated so far, and the Trump media machine . . . well, we know how they operate.

St. Martin’s Press will publish Kushner, Inc. as a follow-up to Ward’s 2014 book on developer Harry Macklowe, The Liar’s Ball. No word yet on how dizzying the advance, or how mega the print run.