The Melville House UK team in action at LBF

Have you all recovered, then? That tickly cough cleared up? Circa one thousand emails flagged “to action” in the ol’ inbox? Finally got some vitamins after a steady diet of £9 chicken caesar wraps and americanos that somehow always appear to be at a temperature slightly above boiling? Good. Because it’s time to delve into the Melville House Post-London Book Fair Debrief Extravaganza! (MHP-LBFDE!)

While it’s impossible to sum up the fortunes of the publishing industry based on three days of rushing from small table to small table in an airless conference hall in Kensington, we can safely say: it was busy. And it was buzzy. In fact, it felt busier and buzzier than it has done for some time, and alive with fresh ideas. Conversations frequently turned to important subjects—publishing’s gender pay gap, the rallying of small bookshops against the bigger powers, the #metoo moment—and of course, the f-word. No no, the other, better f-word: feminism. It seemed everywhere we looked, another house was heading up their 2019 list with a bold feminist title, as Sian Cain reported in the Guardian shortly after the fair. The tide, it seems, is turning — and this is, very obviously, A Really Good Thing.

However, as Jessa Crispin comprehensively explains in her 2017 polemic Why I Am Not a Feminist, there’s an important distinction to be made here between feminism as just another book trend—i.e. a marketable, palatable, safe business prospect—and feminism as a living, evolving, uncompromising idea. “Feminism is the new adult colouring!”, was one remark fired our way during the course of the fair — meant, of course, in jest, but perhaps containing a warning, too.

If feminism is indeed “having a moment,” as those colouring books did a few years ago, what happens when that moment inevitably ends? How do we as an industry ensure that ideas of equality and inclusivity continue to permeate beyond the initial rush of excitement that surrounds them now? There’s no easy answer to that, but it’s clear that those at the top must think long-term in order to ensure they aren’t left behind — and, more importantly, to understand the difference between monetising those ideas and actually applying them to one’s own practices. That, more than anything else, is the challenge for publishers to take away from this year’s fair — perhaps an even greater challenge than trying to get between the International Rights Center and the main hall in anything under half an hour.

Oh, and there was one other big highlight: the bathroom stalls, where the Latvians were bold enough to say what we were all thinking. Behold: 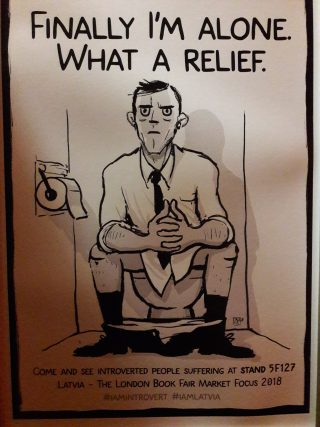