“It’s probably the stupidest thing the human race does, to look for patterns in this way”: Christopher Hitchens has some opinions 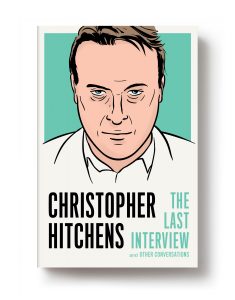 “Several leaders of the Christian church, as you know, said about the last tsunami that it was a punishment. In Britain several of them said it was a punishment for homosexuality. It used to be said that earthquakes were a punishment for sodomy… Oddly enough, the San Francisco earthquake only hit when San Francisco was famous for other things. When New Orleans got flooded the only bits that didn’t get flooded were the red light district. Okay? So anyone who says they know God’s mind in this had better not mind looking a bit foolish, which”—turns to Jesuit priest—“you obviously don’t, or had better take responsibility and say, yes, by letting it happen God must in some wish it to. Why would He do that?”

The voice speaking these words isn’t a hard one to recognize if you know it — the one and extremely only Christopher Hitchens. This December, the gone-too-soon firebrand di tutti firebrands will officially be joining the hereafter’s most exclusive unofficial club, when we publish Christopher Hitchens: The Last Interview and Other Conversations. The guy’s trademark charm, argumentativeness, and ability to produce stunningly nuanced articulations (see also: charm, argumentativeness) roar on every page.

Here, to keep you excited as the weeks plod along, is some 2009 footage of Hitchens on Q&A, an Australian talk show, where he enjoyed the opportunity to disagree vigorously with several people at once, and promised he had not seeded the audience with sympathetic Iraq War supporters. Grab a few of your preferred vices, sit back, and enjoy.

(And sorry about the “hereafter” remark, Hitch.)