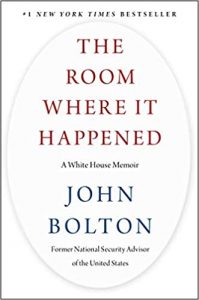 In perhaps the most high-profile bit of book-related court intrigue of the season, last week the Justice Department subpoenaed John Bolton’s literary agent and publisher as part of its investigation into whether the former national security advisor’s recent memoir, The Room Where it Happened, contains potentially harmful classified information.

And yesterday the stakes were raised again, as a court filing suggests that White House aides continued to disrupt the clearance process, even after the manuscript was cleared for publication. The filing alleges that Ellen Knight, the official tasked with prepublication review was asked “to sign a declaration to use against Mr. Bolton that made a range of false assertions. She said that after her refusal, she was reassigned from the White House despite earlier expectations that she would transition to a permanent position there.”

Writing for the New York Times, Michael S. Schmidt and Charlie Savage called it an “extraordinary twist” coming as the Trump administration hopes to seize the $2 million dollar advance Bolton received for the book. 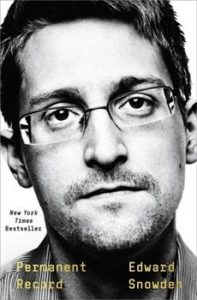 But it has been a helluva season for cases against former government employees and their books, and another 4 million dollar advance hangs in the balance of another Justice Department lawsuit–this one against Edward Snowden that came upon the publication of his book Permanent Record last year.

It was announced Tuesday that the over $5 million dollars Snowden earned from his book (the $ 4 million advance plus subrights sales and speaking engagements) would be forfeited into a trust, pending further action.

This is not a settlement, mind you. As Katelyn Polantz writes for CNN: “An attorney for Snowden said the agreement filed in court on Tuesday doesn’t mean the US government will be able to immediately collect the money, because Snowden is considering appealing the judge’s previous decision that he was liable for the disclosures.”

Perhaps settlements over huge advances in the Justice Department’s attempt to keep a lid on government secrets is the new live sports or going to the movies–in which case, we’ll keep you posted of any “extraordinary twists” yet to come.