It seems climate change is happening, and Prince Charles pens a book to prove it 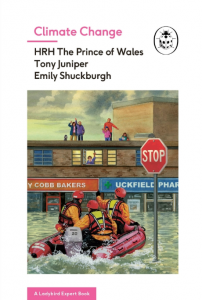 If you believe Donald Trump, then global warming isn’t happening. Phew! That’s a weight off my mind.

Except…. it is, according to most experts, and even Trump’s nominee for secretary of interior, Ryan Zinke, has chimed in recently, saying “the climate is changing. The debate is what is that influence and what can we do.”

To address this era of “post-truth” we seem to be living in, where expert opinions are shunned (what do the experts know anyway?), Penguin is publishing a new series seeking to educate and demystify, in a style similar to the hugely popular Ladybird Books for Grown-Ups parody series, which has sold over three million copies to date worldwide. Describing the new Ladybird Expert books, Penguin says:

Written by the leading lights and most outstanding communicators in their fields, the Ladybird Expert books provide clear, accessible and authoritative introductions to subjects drawn from science, history and culture.

The book in the series getting the most attention, publishing on 26th January, is written by His Royal

Highness The Prince of Wales, along with onetime Green Party parliamentary candidate and former executive director of Friends of the Earth Tony Juniper, and climate scientist Emily Shuckburgh.  Climate Change aims to provide a basic guide to the subject of global warming in only fixty-six pages, tackling the challenges and dangers it poses, and possible ways to reduce impact.

Prince Charles has always been very vocal in his ideas on climate change, including making one of the opening speeches at the United Nations Conference on Climate Change in Paris in 2015, saying:

On an increasingly crowded planet, humanity faces many threats — but none is greater than climate change. It magnifies every hazard and tension of our existence. It threatens our ability to feed ourselves; to remain healthy and safe from extreme weather; to manage the natural resources that support our economies, and to avert the humanitarian disaster of mass migration and increasing conflict.

If, at last, the moment has arrived to take those long-awaited steps towards rescuing our planet and our fellow man from impending catastrophe, then let us pursue that vital goal in a spirit of enlightened and humane collaboration.

The idea for the book is said to have come to him at the conference, and Penguin was shortly after approached by Clarence House, the royal residence. Roland White, a publishing director at Penguin, told the Sunday Times, “It was a coincidence where we were thinking about a new series for adults after the huge success of the spoof books, but this time wanted some factual books by experts on science, history and arts subjects.”

The books feature old-fashioned illustrations, just as the original Ladybird books did, and as books in the recent Grown-Up series also have. Juniper told the Mail on Sunday:

His royal highness, Emily and I had to work very hard to make sure that each word did its job, while at the same time working with the pictures to deliver the points we needed to make.

I hope we’ve managed to paint a vivid picture, and, like those iconic titles from the 60s and 70s, created a title that will stand the test of time.

Penguin takes a interesting tack, following a similar design to their parody books. While mimicking a hugely successful series makes sense on the one hand, on the other, will readers be duped into thinking the books offer more satirical wit when they are in fact serious and concise volumes? Either way, they look set to be big sellers. The two other titles in the series due to be published later this month are Evolution by Steve Jones and Quantum Mechanics by Jim Al-Khalili.