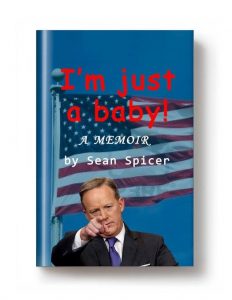 We have not been very private about our low opinion of Sean Spicer. And while we’ve definitely, y’know, had our fun with it, the truth is that profoundly serious concerns underlie the yucks. Spicer (whose friends describe him, in fact, as a nice guy) has made himself the petty adjunct of a brutal administration — attacking journalists, disseminating lies, and dragging our highest levels of political discourse right into the gutter.

So forgive us for observing that he’s having a pretty rough couple days.

First, he made an absurd micro-scandal by taking the New York Times to task for a story in which Glenn Thrush and Michael M. Grynbaum referred to him as having been “New England born.” Spicer, who grew up in Rhode Island (which nobody disputes is part of New England), took to Twitter to complain that he was not born there. (Thrush says he sent Spicer an email attempting to verify the facts in the article, and got no response.) Spicer has still not explained where he was born, forcing the Times to run what must be one of the silliest corrections in its history:

A few days later, Spicer was forced to withdraw from a fundraiser for Ohio Republican Frank LaRose, who had the unmitigated audacity to call Trump’s notorious “grab ’em by the” comments “abhorrent.” (Good on you, Frank LaRose.)

And then there was the time, just shortly after that, that Spicer’s boss hung him out to dry in full view of the entire world, in this back-and-forth with Fox News’s Steve Doocy:

SD: A big story here in Washington, D.C., that Sean Spicer asked his communications team, “Okay, come on in, everybody. Put your phone right over there. We have a leaker here. We’re going to have the White House lawyer look at your phones.” How intent on — are you on finding who the leaker or leakers are in your administration, not just your communications team —

SD: — but over at the State Department, maybe the intel community, everywhere?

It’s almost completely impossible to imagine that Sean Spicer is enjoying any of this.

Walk away, Sean. You should just walk away. It’s not too late to step into the light.