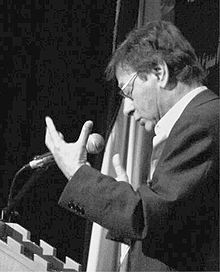 During a recent awards ceremony for Israel’s Association of Composers, Authors and Publishers (ACUM)—which is something like that nation’s version of ASCAP—Arab Israeli singer Mira Awad, the recipient of an award for “promoting Arab creativity within Israeli culture,”  performed a musical rendition of Palestinian poet Mahmoud Darwish’s “Think of Others.”

All perfectly normal stuff for a pop music awards show. All very sensitive and multicultural and pluralistic. Unlikely to compensate for decades of illegal settlements, politically motivated stabbings, or the brutal shelling of civilians, but still, you’d have to say it’s a step in the right direction.

Unless you’re the Israeli Minister of Culture and Sport, Miri Regev, an MK in Benjamin Netanyahu’s reactionary Likud party, whom the Daily Beast’s Ricky Ben-David and Nira Yadin have called “The Sarah Palin of Israel.” According to a report in the Times of Israel, Regev found the performance 100% intolerable and disgusting, and stormed out of the ceremony mid-song, having announced in advance that she wouldn’t sit through it, telling attendees that Darwish was a “Palestinian poet who hoped… for the death of the Jewish state, who wanted to eat the flesh of the ‘occupier.’”

For context, this is the poem in question:

Which seems like a very non-cannibal series of thoughts and feelings.

That weird comment about eating the flesh of the occupier comes from this stanza of a 1964 poem, titled “Identity Card”:

I do not hate poeple
Nor do I encroach
But if I become hungry
The usurper’s flesh will be my food
Beware..
Beware..
Of my hunger
And my anger!

Now, I can understand why you might get your hackles up over the admittedly graphic imagery here. But one should probably note that, in 2012, Regev called Sudanese refugees in Tel Aviv “a cancer in our society.” This was weeks after someone or some group of Israelis firebombed a daycare center for Sudanese refugee children. I’m just saying I’d expect her to have a little more respect for the strategic use of inflammatory rhetoric. Or maybe that’s just the cannibal in me talking.