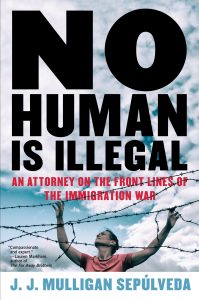 J.J. Mulligan Sepúlveda, author of No Human is Illegal, appeared on In The Moment with Lori Walsh this week to discuss his new book and the national immigration debate.

Read an excerpt of the interview below or listen to the full interview here.

Lori Walsh: Part of [the book] is a memoir, part of it an analysis and a history lesson about immigration policy and efforts to reform it over the years, but really it’s about humanizing the people that are caught up in this system. Let’s talk about the big picture first because problems and the debate over US immigration did not begin with Donald Trump or Nancy Pelosi. It goes back a way, even though it’s certainly changed drastically after the 2016 election. Tell us a little bit about the Obama administration and some of the contradictions that we were seeing then.

J.J. Mulligan Sepúlveda: Well, immigration law hasn’t changed in the books since 1996, and 1996 was when they created a whole host of crimes that lawful permanent residents could get deported for and all these other issues were created in 1996. And then after 9/11 they created the Department of Homeland Security, which houses ICE and the border patrol, and that was a turning point because it equated immigrants to terrorists and that’s something that’s continued on to the Obama administration and the Trump administration—equating immigrants now to gang members or to drug dealers. And the Obama administration really took the Department of Homeland Security to a whole other level. It in essence left a loaded gun on the table of the oval office and Trump is definitely firing off quite a few rounds.

Walsh: What was going on during that time as the immigration raids versus what we look at now with DACA and the DREAMers? There were almost two presidents or two administrations that worked at that time.

Mulligan Sepúlveda: Absolutely. It was definitely a Jekyll and Hyde type of presidency under Obama. He created DACA for people that had come to the US as children before 2007 and then he tried to expand it with DACA, DACA+ we call it and DAPA, the Deferred Action of Parents of Americans or of lawful permanent residents and then on the other hand he was deporting up to 3 million people and separating these families in the US that have lived for ages and it was really tough to reconcile. The argument was he was trying to appease the republican party to get them to the table on immigration reform by showing that he could be tough on immigrants and enforce the laws. But I was there in 2016 in New York City when you had these huge raids against all kinds of immigrants in the city and that was his last six months in the presidency. It wasn’t like he was trying to bargain at that point. It was just difficult to reconcile.

Walsh: I think so much of this book opens people’s eyes as far as how things really were. One of the first things that you mention, and I would like you to explain if you could, is that lawyers are at the immigrant’s own expense. Tell us, whereas most Americans assume that you could get a public defender if you could afford nothing else. That’s not how it works for people that have crossed the border or overstayed a visa. Explain that a little bit and what it looks like in real life.

Mulligan Sepúlveda: Well the immigration law statute says that immigrants are given the privilege of representation and then there is a parentheses after that hollows out this privilege and it says “at no expense to the government,” which means at full expense to the immigrant. So if we’re talking about an immigrant youth who is 16 or 17 and has come without his parents, he has to go find an attorney, whether a private attorney and get money to do that when he’s probably paying off a loan to a coyote who helped him get to the US, or at a non-profit. I’ve always worked at non-profits and there are few of them in certain areas in the country and they’re overstaffed, underfunded, and there are just so many cases. There are studies that show an immigrant is six or seven times more likely to be successful in their case if they have an attorney. There’s a huge justice gap in the situation.

Walsh: Which causes some fraud as well. Fake attorneys. People trying to capitalize on that gap.

Mulligan Sepúlveda: Yeah. There’s what’s called notarios. Notarios are people, often immigrants themselves, that speak in Spanish and figured out how immigration law works and they can fill out applications for people without being lawyers because immigration law allows them to do this. They can become representatives or they can just help people fill out applications and ask for exorbitant amounts of money for this. California has tried to regulate this, other places have tried to regulate this, but there’s definitely a huge amount of fraud in charging immigrants exorbitant prices just to fill out an application.

Listen to the full interview here.

Purchase No Human is Illegal here.

*This interview has been edited for clarity.